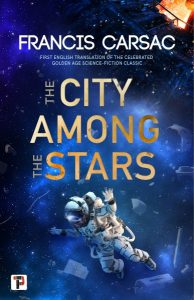 Ah, the Golden Age of Science Fiction. Heinlein. Asimov. Clarke. Names which defined an era and shaped a genre. For non-English speakers, the name Carsac belongs on that list. A French writer during those years, he was published and translated through much of the world. Somehow, though, his 1962 book City Among the Stars was never translated into English. Until now.

Tankar Holroy is a soldier for the dying Earth Empire. He is sent on a secret mission to deliver a message to one of the Empire’s fleets, a message that could turn the tide of war against the rebels and in favor of the Empire. However, his ship is sabotaged. He is left floating in space with hours to live, waiting for a rescue that cannot arrive.

Yet, somehow, rescue does arrive. A ship, larger than he has ever seen, plucks him from space. On board his injuries are treated. He finds that he has been rescued by the Stellarans, humans that had fled Earth centuries before and now lived solely on their giant spaceships, seldom approaching planets and generally despising the people and cultures that exist on them.

The Stellarans pose no threat or advantage to the Empire, but they are themselves threatened by an alien race. To effectively face this threat, they need a technology developed by the Empire: the ability to track ships through hyperspace.

Although Tankar has knowledge of this technology, enough to build it himself, he is faced with an internal dilemma. Should he help these people who rescued him but still despise him? Or should he withhold the knowledge out of spite?

As many Golden Age sci-fi books do, this book suffers a bit from knowledge and technologies unavailable to the author at the time of his writing. Colonies on Venus now seem impossible given the hellscape of the planet’s surface and atmosphere. A ship would not need a huge library of physical books. Communications and computer technologies are already far beyond what Carsac imagined.

However, his social imagination was impressive. Unlike some who dreamt of an idyllic future human race that has left prejudice and violence behind, Carsac sees a future where one group of humans is led by a corrupt and decaying Empire facing its end and another group of humans is unwilling to help their planetary brethren, in fact despises them, simply because they are “planetaries.” And Tankar Holroy is a very flawed protagonist. His views about women are seen by the Stellarans themselves as wrong, his pique at being ostracized leads him to withhold vital information needed by the Stellarans, he leaps to judgments which to this reader seemed ridiculous but were quite in keeping with his character. All of which points to the brilliance of the author.

Carsac manages to tell a compelling story with a broken protagonist moving from a corrupt system to a system that judges him for the corruption he represents. Pulling that off is a high wire act for an author. There were times in the story where I did not like anyone in it–yet I couldn’t stop reading.

The Golden Age. We now know it was not so golden. Thanks in no small part to Jeanette Ng’s powerful acceptance speech, the John W. Campbell award has been renamed to the Astounding Award for Best New Writer. Campbell was a racist and a fascist. Asimov behaved abysmally toward women. Other writers have not seen their luster diminish as much, but there are themes and sensibilities that were of that time which we would now find at least dated and possibly even abhorrent.

But oh! Those white men (and for the most part they were, especially because of Campbell’s influence), those white men could tell a story. Carsac’s City Among the Stars is such a story. Adventure, betrayal, redemption, triumph, despair. The story of Tankar Holroy may not be one you know yet. Once you read it, you are unlikely to forget it. 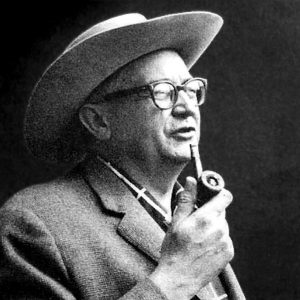 Our thanks to Anne Cater of Random Things Blog Tours and to Flame Tree Press for our advanced copy of this book, given in exchange for our honest review.

Francis Carsac, a pseudonym for the world-renowned French scientist, geologist, and archaeologist Francois Bordes, wrote and published six novels during the golden age of science fiction.

One thought on “Blog Tour: City Among the Stars, Francis Carsac”