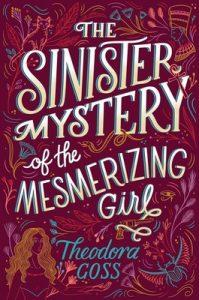 If you have not read the two previous books in this series by Theodora Goss, stop. Find them, read them, and come back. Not because I will give away (too many) spoilers, but because you have cheated yourself out of experiencing the totality of one of the most delightful series going right now in fantasy literature.

The tales of the Athena Club are a feminist homage to classic Victorian horror stories. Robert Louis Stevenson. Jules Verne. Mary Shelley. Bram Stoker. Nathaniel Hawthorne. These and other writers created timeless characters that continue to inspire authors to this day: Dr. Jekyll and Mr. Hyde, Dr. Moreau, Victor Frankenstein, Dracula, Beatrice Rappaccini. Rather than tell their stories, though, or the stories of their arguably more famous male creations (with my apologies to Ms. Rappaccini), Goss tells the stories of their daughters or their female creations. Several of these women have found each other and formed a sort of family, a family which, with the help of their friends Sherlock Holmes and John Watson, solves various mysteries. They call themselves the Athena Club and take as their motto the owl, one of the symbols of that Greek goddess.

When we left our team at the end of their monstrous last book…OK, let me stop for a moment. The book was titled, “European Travel for the Monstrous Gentlewoman.” And it was monstrous in size, over 700 pages! The book itself was delightful and I reviewed it last year. But I will admit to being a bit relieved when this one came in at closer to 450 pages.

So, when we left our team at the end of their monstrous last book, they were in various parts of central Europe. Then Athena Club founder and leader Mary Jekyll receives a telegram from their redoubtable housekeeper Mrs. Poole: their young maid, Alice, has been kidnapped, and Sherlock Holmes and Dr. Watson are missing. Mary, her sister Diana Hyde, and Justine Frankenstein race home to begin the search for their friends.

What follows is a delightful romp through a seamier side of London than these refined ladies had ever seen (excepting Diana). New characters from Victorian Literature appear, including Oscar Wilde’s Dorian Gray and Bram Stoker’s Margaret Trelawny. The Athena Club members return to London to help with the search and hopefully rescue both the damsel in distress and the missing detective duo before it is too late.

Theodora Goss reveals her familiarity with the material of the 19th and early 20th centuries throughout the books. She also makes that material her own. Her characters are both faithful to their literary inspirations and are able to move beyond their constraints. Although the story is set during Victorian times, Goss’s language and feminism is quite modern even though her characters clearly live as women of their times: dressing (usually) in dresses and behaving (usually) quite circumspectly around men. Still, these are no frail flowers who need rescuing. When people need rescuing, when crimes need solving, when monsters need saving, and when monstrous people need stopping, the Athena Club is quite capable of taking care of themselves.