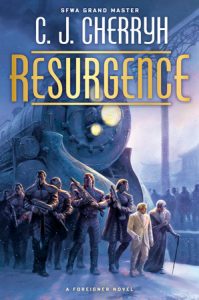 Readers of this blog know I am a huge fan of the Foreigner series by C.J. Cherryh. Nominated for a Hugo for Best Series, Cherryh has explored this world in now 20 novels over a more than 25-year period.

Human Bren Cameron is the paidhi-aiji, representative of both the “presidenta” of the humans and the Aija who leads the “atevi.” Humans inhabit a single island on the atevi home world, limited there by treaty after landing on the world and fighting a war with the atevi–a war they lost. Bren Cameron has redefined a position which once held no power and little responsibility. He has become the personal envoy of Tabini-aiji, fulfilling a traditional role in atevi relations of serving as a neutral arbiter in disputes, fairly representing all sides to the others.

And there are multiple disputes to resolve among the atevi. Tabini’s grandmother, the aiji-dowager Ilisedi, supports her grandson’s rule–but still likes to meddle in the affairs of her people. A new candidate to rule a troubled region has emerged, one who has the favor of his cousin: Tabini’s wife. The troublesome ruler of another region has a proposal that would link his region to the national railroad, a linkage that could provoke another ruler to war but could possibly pacify his own region and bring them more fully into the central government. Ilisedi has decided that she is the one who can bring the parties together and make this happen, so long as she has the help of one Bren Cameron.

As is typical in the Foreigner series there are plots and scoundrels, negotiations and mistrust, and questions of what is best for all parties concerned. Cameron must use all of his diplomacy and wisdom to keep a lid on a volatile situation, one that could lead to unity or break out in war.

Cherryh’s series is quite ambitious, as any series must be to stand the test of more than two decades in print. She has a human at the center of her plot, a human with human emotions and thinking patterns and behaviors, but also a human who has studied the atevi for years and has molded himself to fit within their society. Every other major character in this and most of her Foreigner books is atevi. They are not human. They do not react as humans do, they do not behave as humans do, they do not think as humans do. There is significant overlap, both because of the shared history of two centuries and because of the common experience of being sentient intelligent beings used to being the masters of their own planet. But the traditional role of the paidhi was to keep the peace by maintaining a safe separation between the cultures. That separation is beginning to unravel, but that brings with it another layer of anxiety and threat to the entire planet.

It is probably impossible for any human to truly understand an alien mindset. We anthropomorphize goldfish given half the chance! Never having met aliens (that I know of) means that I cannot pretend to know what they would think, how they would react, what they believe or feel or understand. Cherryh’s aliens straddle that gap between beings so different they cannot relate to us or us to them and beings so like humans that we can give birth to little Mr. Spock’s who share DNA from two planets. The former seems more probable than the latter, but Cherryh’s fiction offers us a third choice: beings that are similar enough to humans that we can coexist and converse with them, but different enough that a casual acquaintance can be a dangerous opportunity for misunderstanding. That’s a fine line to walk, and she dances along it like an Olympic gymnast on a balance beam.

Each of the books can be read as stand-alone novels, and the entire series is broken into semi-autonomous trilogies that still feature the same primary characters. It is worth the time and effort to read the whole series, but even reading one of the trilogies brings its own reward. Resurgence is the second book in the seventh(!) trilogy, and I enjoyed it. At this point, returning to the series is reacquainting with an old friend, and those reunions never get stale.