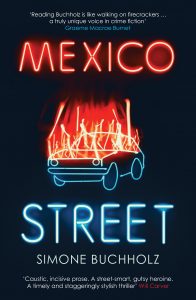 Having book-blogged for almost two years, I am at the point where there are not a lot of books that leap out at me as being unique in their writing style. Every book has its own uniqueness, its own freshness, its own perspective. But most writers obey certain unspoken rules, rules that give a familiarity to even new books.

Mexico Street is that rare book which caught me by surprise and broke some of those unwritten rules. The story is told in the first person, primarily from the perspective of the protagonist, Chastity Riley. Riley is a state prosecutor in the German city of Hamburg. She drinks a lot, smokes a lot, and is as tough as they come. Few people break through her shell, and even those few cannot get too far past her defenses.

Putatively the book is about the investigation of a murder. A young man is found in a burning car. Although rescuers get to him quickly, he dies from smoke inhalation. Blood tests show that he was drugged and left in the car, unable to wake up and escape. Riley joins the police in investigating the homicide, an investigation which takes them to the young man’s hometown of Bremen where he grew up as part of a criminal family and to the young man’s workplace. A mysterious woman also factors in. Riley and the police are unsure whether she is a witness, a suspect, or something else.

The plot itself is straightforward. The police investigate their leads, follow the trail, and work to solve the crime. Red herrings and false starts abound. That much is right out of the noir mystery playbook. Even the protagonist is not an uncommon type, though usually the world-weary alcohol-craving chain-smoking investigator is a man.

What stands out to me is the storytelling style. Riley is a witness to and participant in the entire investigation, and most of the book is seen through her eyes and lived through her experience. Other writers do this, but the combination of protagonist Riley’s wit, exhaustion, and jaded view of the world makes it stand apart. The reader gets a very different view of the case than the usual omniscient eye floating over the story. Occasionally the view shifts from Riley to the victim or to other characters in the story, but for the most part Riley is telling what she is seeing and hearing and feeling.

Buchholz is also not afraid to wander away from the case. Riley has a personal life. It may be a train wreck, but it is her train wreck. Her drinking, her sex life, her relationships with the police officers, all come into play. Part of an interrogation is missed when Riley falls asleep–and therefore we as the readers miss that part as well until Riley is brought up to speed. It is a very intimate view of the plot, an insider’s view that is flawed (in a wonderful way) by the perspective of the narrator. She is not an unreliable narrator per se, but seeing the case through her eyes lets it unfold organically, and allows for surprises throughout because Riley herself is surprised at events.

This is definitely a noir genre book, with the hard-boiled investigator who lives a dangerous personal life fighting her own demons. But it is also an imaginative storytelling technique that in some ways reminded me of George Saunders Lincoln in the Bardo. My literary fiction friends would probably cringe at the comparison (Buchholz might as well) but the unique voice and willingness to defy conventional paths strike me as similar.

Mexico Street definitely has its roots in the noir tradition but Simone Buchholz (with translation from Rachel Ward) has created her own character with a powerful voice and very personal perspective. I was quite taken with the story and even more with the storytelling. This was a delightfully surprising book for me. 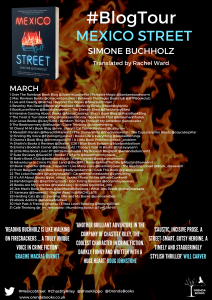 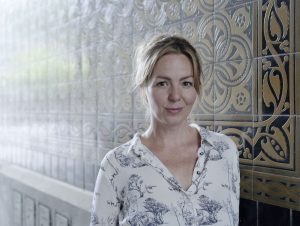 Scintilla is pleased to be part of the blog tour organized by Random Things. My deep thanks to Anne Cater, Orenda Books, and Simone Buchholz for my copy of Mexico Street in exchange for an honest review. The opinions are those of Scintilla alone. For other impressions of the book check out the rest of the tour.