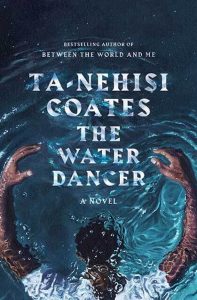 Ta-Nehisi Coates has long been one of the most insightful commentators on the American social and political scene. I have followed his work, primarily in The Atlantic, for several years. His non-fiction books have long been required reading for me. With The Water Dancer, Coates turns his prodigious talent and gift for words to fiction. The result is a resonant story that is not only a historical/fantastical novel but also a contemporary social commentary.

Hiram Walker was born a slave. His mother was sold while he was still young, and he grew up in the care of Thena, a slave whose own children had been sold away. Hiram’s father was the white owner of the plantation.

Early in life Hiram’s intelligence and talent caught people’s eye. He had a gifted memory and a flair for language. Soon his father became aware of his abilities and had Hiram moved into the manor. There, Hiram learned to read by listening in on his half-brother’s tutor.

Coates’s non-fiction writings often focus on the place of African Americans in contemporary society. The Water Dancer, though set in the time of slavery, explores many of these same issues. What place do people have in a society that brought them here involuntarily? Can a society ever be truly united when it was built on such a damaged foundation?

There are many other difficult questions the book asks, usually without providing any easy answers. One of the characters is admittedly a child of privilege, a white person of standing based solely on her birth and color. Yet she uses this privilege to free slaves, and to transport fleeing slaves to the north via the Underground Railroad. Could she do more? Should she do more? At what point is she hiding her activities by using her privilege, and at what point is she excusing her failures to act more aggressively by using her privilege? There is no easy answer to these questions, and Coates does not suggest there should be. Sometimes this woman does bad things–but she does them to bad people and she does them for good reasons. Is that justified? The reader is allowed to judge. Coates does not.

This is not the easiest book to read. The subject matter is difficult. The topics are provocative and deep. The challenges of race, class, sex, economics, social inequity, etc., are not topics for the faint of heart. But the story is beautiful, the language is exquisite, and the characters are fascinating. I loved this book.