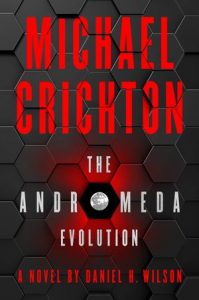 I first read Michael Crichton’s The Andromeda Strain when I was in my tweens. I remember being enthralled and terrified by the thought of a rogue virus from space threatening the entire planet. Decades later and set 50 years after Crichton’s classic, Daniel H. Wilson continues the story in The Andromeda Evolution. Some 40 years after I read the original, this sequel recalled the same thrills and chills.

A structure has mysteriously arisen in the heart of the Amazon. There are no roads, no airstrips, no evidence that humans (other than indigenous tribes) have ever been there. It is, however, near the area where a Chinese satellite had crashed from orbit. A preliminary investigation indicates a relationship to the long-feared Andromeda virus, and a secret government watchdog agency, dormant for nearly 50 years, is triggered into action.

Project Wildfire was created to respond to a new appearance of the Andromeda virus. Comprised of military personnel and on-call scientific experts from around the world, this new threat in the heart of Brazil brings together some top scientists: a xenogeologist from Kenya, a Ph.D. (and army officer) from China, an astronaut whose ALS constrains her on earth but who enjoys new freedom of movement on board the International Space Station (ISS), a nanobot expert who grew up in the slums of India, and unexpectedly the son of one of the original Andromeda scientists–a roboticist whose expertise does not seem well suited to this expedition. Nonetheless, the general in charge of the mission insists that Stone be part of the team, so into the Amazon rain forest they go.

In classic Chrichton fashion, almost everything that can go wrong does go wrong. They soon encounter the deadly effects of the virus on both animals and humans. They are attacked by indigenous tribesmen. They are betrayed from within. And it is fair to say that, also in classic Crichton fashion, some of the science and technology in the book is…a bit of a reach. But Chrichton and Wilson are not trying to write a “how to” book. This is a thriller. And it is a darn fun one.

If you enjoy thrillers and enjoy Crichton, then this is an outstanding continuation of a classic novel. If you prefer your sci-fi to have more sci than fi, well, this may be a stretch for you. I would not be surprised at all to see this adapted for the screen someday. Nor would I be surprised to discover years from now that some precocious kid read The Andromeda Evolution and, like I, fell in love with a genre and a writer (in this case, writers) who spoke to both their nerdiness and their sense of adventure.