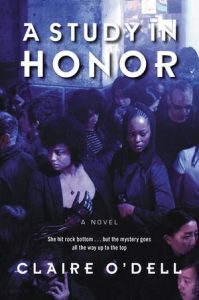 There have been a lot of stories inspired by the original Sherlock Holmes. One of the newest and most unique is A Study in Honor by Claire O’Dell.

Janet Watson is an injured surgeon home from the second American Civil War. She lost her arm in an attack on her post in Alton, IL. Returning to Washington, D.C., she finds that a poor economy and ambivalence about the war has combined to make replacing her arm with a fully functional cybernetic that would allow her to continue practicing medicine is neither politically nor financially likely.

Worried about money, uncertain of her future, Watson encounters a former patient from the army who has a friend who needs a roommate to share expenses. Sara Holmes is brilliant, eccentric, incredibly observant, and very secretive. Despite numerous red flags, Watson accepts Holmes’s offer and takes a room in her home.

If crossing the gender line in a Holmes/Watson story is not enough for you, both characters are also women of color. Additionally, Watson is gay and Holmes might be, although that is more alluded to than definitely established in this first book. The book is set in a near-future America which in the post-Trump years saw a right-wing rebellion against the government with a rebel republic established in parts of Oklahoma, Kansas, and surrounding areas. This has put all of the gains by people of color, LGBTQ+ persons, and really all civil rights in general into a precarious situation. Some people blame the improvements of civil rights for the division of the country. Others blame the backlash on right-wing extremism that refuses to adapt to reality. Either way, people are struggling to keep the rights they have earned and others are questioning whether those rights are worth a divided nation.

Nods are made to familiar Holmesian tropes. The opponent is named Adler. Holmes has an informal network of allies and informants that keep her apprised of events that don’t make the headlines. I suspect those more familiar with Doyle’s canon will see many more of these nods than I did.

None of that would excuse a poor story, though. There is no worries on that count with A Study in Honor. O’Dell delivers. The plot moves quickly, the characters are deep and clever, and the situations they face feel real despite being set in a fictional future and being based on literary classics.

If you love Sherlock Holmes, also see the series featured in —