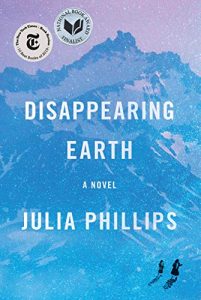 I truly was unprepared for this book. I had seen it on some “best of” lists for 2019, but had not really read any reviews or summaries of the story. What I encountered left me sometimes breathless, sometimes shocked, and always impressed by the skill and depth of this debut novelist.

Disappearing Earth is a series of intertwined stories set in far eastern Russia, on the peninsula of Kamchatka. The opening chapter relates a crime: two sisters are kidnapped in broad daylight. Each chapter thereafter focuses on a different woman or girl in Kamchatka. There is a teenager wrestling with her boundaries and friendships in a scary world where girls could be kidnapped. There are women struggling with their marriages, their health, their children, and the changes in their society. A young woman confronts her sexuality in homophobic Russia. The mother of the two girls tries to move on with her life without them. Another mother, whose daughter disappeared four years earlier, fights to have her daughter’s loss noticed. “Native” women struggle for identity and acceptance in a white Russian society. Throughout the book, some characters appear in multiple chapters. Others make an appearance then move on. We are regularly reminded of the passage of time after the kidnapping, and how time passes differently for people depending on their relationship to the event.

Phillips characters are carved into the pages with precision. They are selfless and self-absorbed. They are ambitious and defeated. They are white and brown. They are married and unmarried, widowed and divorced, old and young, rich and poor. They have nothing in common, except for the challenge of being a woman in a patriarchal society. Some of them support the status quo. Some hate it. Some find their identities in their husbands or children or lovers. Others fight to create their own monuments.

Phillips also beautifully describes a culture, landscape, and region that is unfamiliar territory to probably most of her readers. I, for one, did not know there were several different tribes of natives in eastern Russia. I can only blame myself for my ignorance, but I thank Phillips for opening my eyes. Kamchatka has volcanoes, plains, cities, and villages. Mountains are there. So is the ocean. It is a region unlike anywhere else in Russia, and though similarities can be seen with other places, Phillips recognizes and celebrates its uniqueness. Her prose shares the beauty of the people and landscape.

Disappearing Earth could arguably be described as a mystery or a thriller, but it is much more than that. It is a celebration of a region and a people that are seldom seen in western literature. It is a breathtaking debut from a powerful voice.