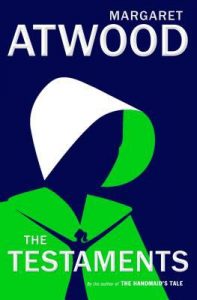 I read The Handmaid’s Tale many years ago. That was my introduction to Margaret Atwood, and I remember being amazed at the skill and wordcraft that went into her story of a U.S. gone mad. Living in 2020 America sometimes makes me question whether it was prescience on her part or whether she is a traveler from the future. If she is from the future, she brings some measure of hope in her sequel to The Handmaid’s Tale, The Testaments.

The Testaments follows the story of three women connected to Gilead. Two of them are in Gilead itself. The third was smuggled into Canada as a child where she was raised without knowledge of her background. There are clear connections to the characters and events of the previous novel and the Hulu series based upon it, but I should let Atwood herself make those connections evident when you read the book.

And read it you should! The Testaments more than lived up to its Booker Prize winning reputation. I was drawn in by the very first paragraph of the story:

“Only dead people are allowed to have statues, but I have been given one while still alive. Already I am petrified.”

This is one of those books that made me completely lose track of time. I spent what I thought was a couple of hours reading, only to find that the entire afternoon had flown by during my focus on the novel. The lives of these three women are compelling, and when they become intertwined the results are explosive. The story moves along at a compelling pace. And by the end most of the questions have been answered.

Margaret Atwood may write speculative fiction that feels far to real, but this novel is more a combination of dystopian future and spy thriller. Regardless of what category one may try to assign it to, it is brilliantly written and wonderfully told.