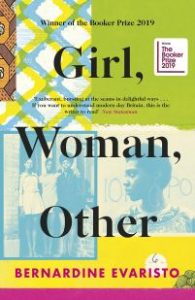 Girl, Woman, Other is a powerful novel by an accomplished writer. Co-winner of the 2019 Booker Prize, Bernardine Evaristo tells the stories of a number of women of varying ages and time periods, connected in a sort of “six degrees” way with each other. A playwright finally getting her big break after decades of relative obscurity. Her former partner and lover. Her daughter. Various friends, and friends of friends. Their mothers and grandmothers and great-grandmothers. These women are mostly black women in a mostly white England, and race plays a part in all of the stories. Their voices, their identities (straight, queer, trans, non-binary), their lives, their choices are all different. What remains the same is Evaristo’s compassionate and powerful language bringing their lives off the page and into our hearts.

Each of the stories stands alone. Each woman/person gets her/their own chapter. They can be read individually, and are quite powerful taken separately. Evaristo explores complicated relationships of sexuality, identity, race, success, and the way those intersect with the relationships each person has with others. Does success mean selling out? Does love require monogamy? If you identify neither as female nor male, what does that mean? If you have lived long enough that your grandchild no longer identifies as female or male, how do you respond to them? In a changing world, how do any of us adapt?

Black identity in Britain certainly has commonalities with black identity in the US (and I am speaking very much as an outsider, a white US male, so I am basing this on my friendships and reading and not on my lived experience). However, the relationships between Britain and its former colonies is very different than the US experience. Evaristo explores some of these differences as one character moves to the US while another marries an American who has chosen to move to London. A third character moves to the Caribbean. They all experience the sting of racism, though its expressions differ somewhat from place to place. Some face not only the aggressions aimed toward people of differing skin color, but also those aimed at immigrants and outsiders more generally. London is different than more rural areas, just as cities in America differ from the surrounding regions. But moving from city to country or from nation to nation does not remove the challenge of racism. It only changes its flavor from one type of bitterness to another.

The people in Girl, Woman, Other are strong, courageous, conflicted, burdened, triumphant, and tragic. Their stories are uniquely individual, but they are also transcendently human. I may not know what it is like to be a black woman or person in Britain–but thanks to Evaristo, I can appreciate the shared humanity between us. At its best that is what stories do, and Girl, Woman, Other is storytelling at its best.