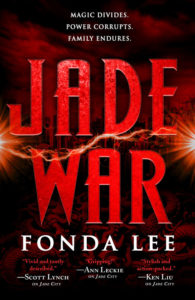 The surviving Kaul siblings remain locked in a battle with their enemies, the Mountain Clan, for control of the city of Jonloon and the island of Kekon. After the death of their brother, Hilo has become the leader of their people. His sister, Shae, is his “weatherman,” essentially the CFO. His brother-in-law is the “fist,” or military leader. And enemies abound.

Fonda Lee’s brilliant novel Jade City now has a worthy sequel. Jade War is as exciting as the first book, with action, romance, and intrigue on every page. I’ve heard that a good novel throws everything but the kitchen sink at its protagonists. The kitchen sink may be the one thing that does remain intact, but as Lee showed in the previous novel no character is safe from the consequences of their actions or the actions of others.

The Green Bone Saga is set in an Asian-inspired world. People of Kekon are able to use the mineral jade to give themselves extraordinary powers: masters can deflect bullets, can stop hearts from beating, can run up the sides of walls, can strengthen their skin to withstand blades, and sometimes even cheat death. Other peoples (and some Kekonese) can also use jade this way but are susceptible to jade poisoning. However, a drug called “shine” can allow even those who would normally find jade poisonous to be able to use it. The side effects and the addictive nature of shine make it very dangerous. The appeal of jade’s power, though, is enough that both criminals and governments are willing to use it in order to gain that power for themselves.

Lee is a wonderful writer, with prose that creates a very real world with very real problems. Her characters do not remain static. They grow and mature, they make mistakes with real consequences, they fall in love and sometimes fail in love. They befriend and betray. Jonloon is a dangerous place full of deadly people. Some of the deadliest are the heroes of Jade War. The Kauls are essentially godfathers of a mafia organization. They do good for people and each other. They kill without compunction. They follow a code that puts honor first. They buy influence and politicians.

Most of all, though, they are a family. They love their children. They love each other. And when all else fails, they know who they can rely upon. Jade may strengthen their bones, but love is the bond that cannot be severed. Family always comes first.