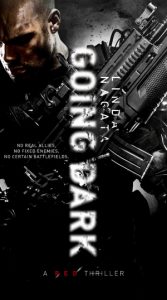 The story of Lieutenant James Shelley and The Red continues through a trilogy of books. After the events of the first book, Shelley and the rest of the Apocalypse Squad return to the US where they face court martial for kidnapping a US citizen and delivering her to a foreign country for trial. Their justification is that she was behind the nuclear attacks on US soil, and that her allies in this attack included members of the administration and the military hierarchy.

They were correct…but they still broke the law and had to stand trial for it.

The trial and its aftermath comprise most of the book The Trials. In Going Dark, Shelley is missing and presumed dead after a mission. He has, however, been recruited to a darker than black ops group that is run essentially by The Red itself. The Red is an AI that exists in the cloud and manipulates people to do its will. It is neither good nor evil, and it does not care about individual humans or even small groups. Generally it seems to try to help humanity, but sometimes the individual cost is very high. Shelley has been plugged into The Red for as long as anyone, but he is beginning to question whether this connection is something he should maintain. The Red is not to be trusted, and although when it suits its purposes The Red will save a soldier or a unit, it might also suit its purposes to send them on a suicide mission.

Nagata plays beautifully with challenging concepts of technology, warfare, individual choice, law and order, and collective good versus individual good throughout this series. The Red offers benefits. It does not want to see society destroy itself. It does not want unchecked plagues or war or famine or climate change. But it also is not interested in total peace and tranquility. And it has no concern for an individual life or free will if that conflicts with the mission at hand. Why would an AI think like a human? Why would an AI have any moral strictures or concerns?

Shelley is almost a metaphor for the good and bad of technology. His body shattered by war, the good of technology is his artificial legs, allowing him to function as effectively as any other soldier. But the skullnet controlling his emotions and interfering with his free choices creates havoc at times. It can be hijacked by parties with their own agenda, then used again to rescue him from those same hijackers. Shelley is a cyborg, part machine and part human, and the fight for dominance is woven throughout the trilogy.

The Red is sometimes hopeful, sometimes frightening, always cautionary about the role of the military industrial complex and the power held by people who profit from war. Ultimately we may not want machines running our wars–but letting humans run them hasn’t worked out too well so far, either.