Book Review and Recipe for: An Elderly Lady Is Up to No Good, Helene Tursten 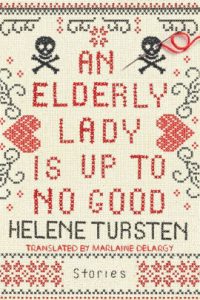 Book Review: An Elderly Lady Is Up to No Good, Helene Tursten

Sweden may be a much more dangerous place than the travel brochures imply. An Elderly Lady Is Up to No Good is a collection of short stories about Maud, an octogenarian serial killer who appears to be a sweet, slightly confused elderly woman to the general public, but who is anything but that when you cross her.

Four of the stories are written primarily from Maud’s perspective. There is her ongoing problem with a neighbor who wants to take her apartment. Another neighbor is beating his wife. Her ex-fiance (they were engaged while both were in their 20s) is now engaged to a woman who has less that affectionate intentions toward him. Maud is too old to endure apartment stealing neighbors or wife-beating neighbors (though she may have been more upset that he was doing it so loudly that it disturbed her rather than the act itself). So, she takes matters into her own hands. She also will not accept a money-grubbing former student of hers taking advantage of her former beau. Maud is in her 80s, but she is surprisingly strong and willing to act without hesitation. No one expects her to strike, and no one suspects her of being capable of violence. The combination makes her effective and allows her to get away with her capers.

The final murder is told in two stories, one from the perspective of a neighbor who realizes that, as unlikely as it may seem, Maud is a murderer, and the other from Maud’s perspective again. The victim here is a local antiques dealer who tries to steal from Maud. This involves both her most elaborate cover-up and the closest she comes to being caught–though she really is not very close. The neighbor, a former investigative journalist, and a couple of policewomen investigating the crime, all realize that Maud is the killer. They also all realize, though, that she has effectively covered her tracks and that there is no possibility they can arrest or convict her. To the world, she is a slightly senile older woman. Perception is reality for the police and the public, and Maud’s crimes will not lead her to a single night in jail.

I will fight anyone who says Die Hard is not a Christmas movie, so I am open to seasonal offerings not fitting the traditional tropes. Three of the crimes in this book (including the one told over two stories) occur near Christmas. I am not sure that makes this a Christmas book, but this short collection would make for an amazing gift. Just, don’t give it to your grandmother. We don’t want her getting any ideas.

Tursten is a Swedish mystery writer who usually writes about police and others trying to solve crimes. This is a change of pace for her, writing about someone getting away with murder instead of writing about someone getting caught for it. The stories are funny and, apart from the grisly murder thing, quite delightful. Maud is a wonderfully devious character, one part sweet little old lady, and one part ruthless murderer. Be glad she is not your neighbor or aunt…but be even happier if she appears on your bookshelf.

Maud is not a tea drinker, she prefers coffee with her sweet treats as her favorite beverage. So while Maud hopefully contemplates a violence free holiday season, below are some cookies flavored with coffee to tempt her tastes.

Preheat oven to 350 degree F., rack in the middle position.

*** If you prefer a sweeter cookie, roll the dough balls in extra large crystal sugar and flatten before baking.

Melt the butter in a large microwave-safe bowl at 3 minutes on HIGH. Or melt it in a saucepan over low heat on the stove top.

Mix in the instant coffee powder, vanilla and rum or brandy extract. Stir it until the coffee powder has dissolved.

Stir in the chocolate chips. Mix until they’re evenly distributed.

Add the flour in one cup increments, stirring after each addition. Mix until the flour is thoroughly incorporated.

Form walnut-sized dough balls with your fingers or a cookie scoop for uniform size. Roll them in a small bowl with granulated sugar if you decided you wanted them sweeter.

Place the dough balls on greased cookie sheets, 12 to a standard-sized sheet.

Flatten the dough balls with the back of a metal spatula, or with the palm of your impeccably clean hand.

Bake the cookies at 350 degrees F for 9 to 11 minutes. Let them cool on the cookie sheets for 2 minutes, and then transfer the cookies to a wire rack to complete cooling.

Recipe and Review: Coffee Chip Cookies for An Elderly Lady Is Up to No Good, Helene Tursten