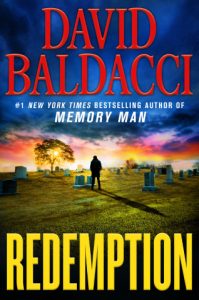 Amos Decker may have an infallible memory, but he is not infallible himself. He can make mistakes. On a visit to his daughter’s grave in his hometown of Burlington, OH, a man comes up to him and accuses him of making a terrible mistake. Meryl Hawkins was convicted of murder in Decker’s first case as a homicide detective. Now freed on compassionate release because of cancer, he wants Decker to prove his innocence.

Decker is not sure that the man is innocent. The case was open and shut; forensic evidence was overwhelming. But he agrees to meet with the man later in Hawkins’s hotel room to discuss the case. When he arrives, though, he finds Hawkins dead. Not from the cancer, but from a gunshot wound to the head.

Was Hawkins guilty? Who killed him, and why? As the questions–and the bodies–begin to pile up, Decker finds that his hometown may be hiding much more than anyone suspected. And the cold case heats up the small town with deadly fire.

The Memory Man also known as the Amos Decker series has become one of my favorite series by any author. Amos Decker suffered a traumatic brain injury on the (American) football field, one that left him with an eidetic memory. He literally cannot forget anything. This may be an asset in solving crimes, but it is a terrible thing for living a life. He cannot forget the trauma of finding his family murdered. That suffering never eases with time and forgetfulness. The injury also changed his personality, making him socially awkward and blunt. His friends understand this and accept it, but not everyone can appreciate this aspect of his character. These traits make for a remarkable book protagonist, though, and each book in the series shows the growth and evolution of Decker.

David Baldacci books usually do follow a certain formula, but it is one that his fans appreciate. The central mystery will be something much bigger than seems possible. The hero will be in mortal danger. He (or she, or they) will prevail and justice will be served. Frankly, there is nothing wrong with this formula, and I return to Baldacci books the same way I return to lasagna: they are comfort food with enough spice to make things interesting.

Then again, I put hot sauce on my lasagna, so my tastes may not match everyone else’s. Baldacci is a best seller, though, so my taste there is not unique at all.

Fans of Baldacci will enjoy this latest offering of the Memory Man/Amos Decker series. Redemption is an excellent thriller, one with enough twists to last through the end of the book, and the possibility of revisiting some of the story in future novels. Amos Decker may have moved away from Burlington, but this story may follow him.