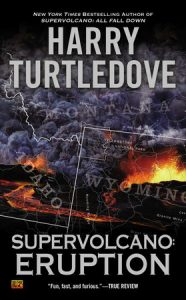 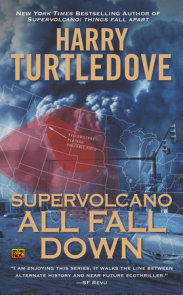 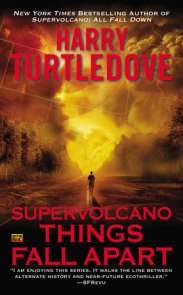 Supervolcano: All Fall Down

Harry Turtledove is a master of alternative histories, but this trio of books looks at (hopefully) an alternative near future. Supervolcano follows the Ferguson family from the months leading up to a massive eruption of Yellowstone through the years following the eruption. Colin Ferguson is a police detective in the fictional southern California town of San Atanasio. His ex-wife, Louise, is living with her boyfriend. His oldest son Rob is a member of a band touring the country. His daughter, Vanessa, works for a widget factory. His youngest, Marshall, is in college. He remains friendly with Vanessa’s ex-boyfriend, Bryce, a graduate student, and in the beginning of the first book meets Kelly, a supervolcano expert studying Yellowstone and warning that the area is ripe and overdue for an eruption.

When the eruption happens, their lives are deeply affected even though many of them are across the country from Wyoming. Kelly barely escapes the eruption, fleeing to Missoula, MT. Vanessa races the ash fall from Denver to Kansas, where she winds up in a refugee camp. Rob is in Maine, where winter descends early and refuses to let him and his bandmates go. Even southern California experiences fallout and climate change, and the effects become greater over time.

Turtledove remains relentlessly focused on this family (including Bryce and Kelly) throughout the series. As the climate changes inexorably from the dust and ash in the air, each member of the family is forced to deal with the new realities of government and economic failures, power grid disruptions, food and gasoline distribution collapse, and a temperature shift that brings snow to Los Angeles and essentially an ice age to much of the rest of the country. Despite that, the family continues to live their lives. They marry, have children, and adapt as best they can. Crime doesn’t stop even though cops and robbers no longer use cars. Babies are still born, loves are still found (and lost), and the beat of life goes on even though the background music has changed.

Although we cannot know for certain what the outcome would be should a supervolcano erupt, there is a fierce optimism in this story of one family’s survival. Millions perish in the eruption, millions more in the ash fall and climate disruption that follows. But the Ferguson family perseveres. Through crises both natural and man-made, their commitment to survival keeps them going. I would like to think that there is hope for humanity in the face of the most dire of circumstances; if there is, it is that willingness to do whatever must be done to adapt to the conditions at hand. Hopefully, enough of us have that to survive whatever this universe throws at us…or whatever we throw at ourselves.

Supervolcano shows a lot of research, but the story is a personal one of a single family’s survival. All in all it is an engaging read by an outstanding storyteller. I have long been a fan of Harry Turtledove, and it was nice to re-engage with his work through this trilogy.