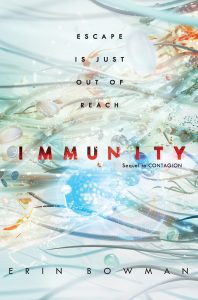 At the end of Contagion, Thea, Coen, and Nova have escaped the plague-ridden nightmare of Achlys, only to be captured by a ship determined to weaponize the plague. Since Thea and Coen are carriers, or hosts, to the plague, they are subject to multiple experiments to see what the infection has done to them. Most people simply die, but teenagers who are exposed develop enhanced abilities: faster reflexes, greater endurance, rapid healing, improved senses, and even telepathy. It soon becomes clear that the only way for them to escape is to rely on those enhanced abilities, even if the risk is releasing the plague into the rest of the world. Because if they don’t escape, their captors intend to create a super-army of plague infected warriors, and nothing will be able to stop them.

Erin Bowman dives much deeper into the characters she introduces in Contagion in the sequel, Immunity. Thea is driven to find her missing mother. Coen is desperate to help his critically ill sister. Nova is determined to prove herself as a pilot. Each of these motivations was introduced in the first book, but they are explored in much greater depth in this book. The motivations provide both strength and weakness for each character: when they might give up, their motivations provide strength. But when they need each other, sometimes their motivations prevent them from relying on others…or even push them away from others.

Perhaps because I was innoculated by Contagion, Immunity was not as frightening nor as creepy. I think, though, it is more that the story is more “escape from bad guys” thriller than “escape from semi-zombies” thriller of the first book. That is not to say it is a bad story. It is quite good, well plotted and well written, with terrific characters and plenty of twists and turns to keep the action going. And there are some semi-zombies in it as well, so it fits well into a Halloween reading list.

Since so many series follow either a trilogy pattern or an ongoing release without an end in sight, it is somewhat refreshing to have a series that seems to definitively end after two books. I don’t dislike the other format, but having a shorter investment in a series is also not a bad thing. Immunity is a solid conclusion to the Contagion series, and I look forward to seeing what new universe Erin Bowman creates.