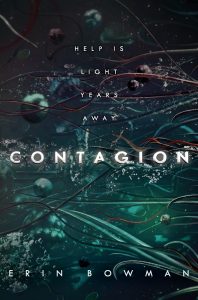 Thea is an intern, assisting a scientist in a routine expedition. Nova is a pilot, eager to prove herself worthy of a full time job with the corporation. Toby is a computer expert, Cleaver works security. They are forced to abandon the planet they are on when a major storm comes, but they are then summoned to a far away planet whose exploratory party has sent a distress signal.

This skeleton crew arrives at the planet, only to discover that something has killed most or all of the people there. The questions continue to mount. What killed the personnel? Was everyone killed? Are they safe? Considering that this is a novel and not a short story, the answer to the last question is a definitive “No.”

Erin Bowman weaves the stories of the crew members together with the story of the doomed mission to the planet in a fast-paced novel that is full of menace and peril. As the crew tries to figure out what happened to the dozens of scientists, engineers, drillers, and others whose bodies they find on the planet, they also have to figure out just who they can trust. Agendas conflict, passions erupt, and sometimes the enemy within is as powerful as the enemy without.

Contagion is a science fiction book, but it crosses genres enough to have been nominated for an Edgar award for mysteries! The author says it was inspired by a nightmare, and it is vivid enough to give some nightmares to readers as well. I greatly enjoyed it and am looking forward to reading the sequel, Immunity, which was just published in July, 2019.