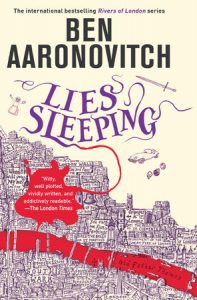 Martin Chorley, aka “The Faceless Man,” is planning something big. It involves a custom made bell, thefts from archaeological sites, and an ancient sword. No one is quite sure what is planned, though, but it is up to DC Peter Grant and his boss to stop it.

In the seventh book of the excellent Rivers of London series we find Grant busy trying to get one step ahead of his old colleague and now nemesis Lesley and her new mentor Martin Chorley, busy trying to keep his niece and fellow magical apprentice Abigail out of trouble, and spending all the time he can with his girlfriend Bev, who is the goddess of a small river in London. The result is a fun mash up of police work, love story, and thriller. Rivers of London keeps getting better, and Peter Grant is a delightful protagonist.

Lies Sleeping introduces new characters, but it also revisits many familiar characters as well. We get to know both Bev and Abigail better, Grant’s partner Sarha Guleed shows some new moves, we encounter an old nemesis again, and we see a new side to Lesley. Aaronovitch does an excellent job reminding us of these characters and bringing them into new situations and showing new growth or at least new aspects of their personalities. And the little twist at the end of the book (as well as the big twist near the end of the book) brings plenty of expectation for further change and growth in DC Grant and his fellows.

Fans of urban fantasy are living in a fantasy world of their own these days. With long running series from Jim Butcher, Seanan McGuire (actually two from her, October Daye and InCryptid), and several others, the shelves are full of excellent offerings within the genre. Rivers of London stacks up well in this field, and Lies Sleeping may be the best one yet in the series.