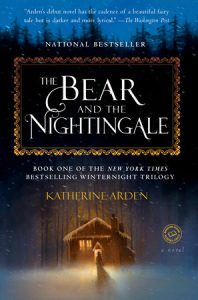 I came back to The Bear and the Nightingale after reading the third book of the trilogy, The Winter of the Witch, for several reasons. I fell in love with the characters and the world after reading Winter, and wanted to get the rest of the story. And since it is October (as I write this), a good “witch” story, complete with creatures of myth and legend, seems only appropriate to the month. But it is unfair to characterize this simply as a witch story. Katherine Arden has recreated the lush taiga of medieval Russia in her novels, populated it with fascinating characters both from history and from her imagination, and seamlessly sewn in various creatures from folklore. She does this with a deft and delicate touch, prose that sweeps the reader along in breathless anticipation of the next page. This is a glorious novel.

Vasilisa Petrovna is the youngest daughter of Marina and Pyotr. Pyotr is a landholder of a large area of forest north of Moscow, with many villages looking to him as their liege. Marina dies in childbirth with Vasilisa, and she is largely raised by the family’s nurse, Dunya. Marina was a Christian but also followed the old ways; she attended church on Sunday, but also left offerings for the household, stable, and forest beings. After Marina’s death, these offerings were not as faithfully observed…and consequences begin.

Vasilisa has her mother’s gift of “sight.” She can see and talk with the supernatural creatures which share her world. Most others cannot. This gift can lead to its own set of problems, especially when Pyotr brings home a new wife to stepmother his children and a new priest to preside over the local church.

The book follows Vasilisa’s life from birth until she is in her mid-teens. It is hard to say too much without revealing spoilers, but I think I can safely say that Vasilisa’s gift brings her into the midst of a conflict between supernatural beings that has been going on for centuries–and that has real world consequences for her family and her home. The choices she faces affect those she loves (and those she does not love, also).

The Bear and the Nightingale is a coming of age book, but it is also a book about faith and orthodoxy, about finding one’s place in the world, and about a young woman refusing to be bound by the conventions of her day. Young women in that time had two expectations: be married or go to a convent. As Vasilisa struggles with those choices, she dares to ask whether there might be alternative options, options that are inconceivable to her strict but loving father and his pious wife. For any of us who have struggled with fitting into the expected notions of who or what we should be, Vasilisa’s straining at the leashes of her culture is familiar and painful.

I look forward to seeing Vasilisa’s journey continue in the second book of the series, The Girl in the Tower. Even knowing how her story concludes in the third book did not spoil my enjoyment of this novel. The Bear and the Nightingale is a fantastic tale by a masterful storyteller.

Book Review: The Bear and the Nightingale, Katherine Arden