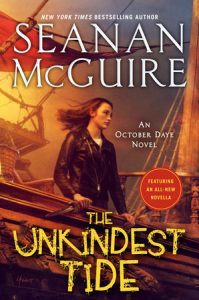 “My family tree has a lot of thorns, and a tendency to draw blood.”

This dry observation from protagonist October “Toby” Daye could describe key plot elements of almost any of the now thirteen book series by Seanan McGuire. Daye is a knight, a hero of the realm, betrothed to Tybalt the King of Cats, a changeling (half human, half fae), and no one to mess with. But people still mess with her and with her family. This time, though, she does not have a choice.

Her aunt, the sea witch (a.k.a. “Luidaeg”) promised long ago that the Roane would be restored. The Selkies have been using the skins of the slaughtered Roane for centuries to inhabit a strange in-between situation. Both fully human and fully fae, the Selkies knew that someday the sea witch would insist that they choose to become Roane and give up their humanity, or choose to become human and give up the fae. (If this sounds complicated…it is.) But when the accounting is delayed for centuries, it’s easy to think that it will never come. Certainly that it will not come in your lifetime.

Toby owes multiple debts to the sea witch, and her blood magic gives her the power when combined with the Luidaeg’s own magic to transform the Selkies into the Roane. When the witch calls her debts due, Toby has no choice but to obey. Ready and willing or not, the time has come.

Still, when one of her friends is threatened by a palace coup, Toby takes the time to do her hero bit. And when one of the Selkies ends up murdered, it takes a knight to save the day. Fortunately, Toby can multitask!

Seanan McGuire manages to make each of her novels fresh while still keeping them unified. Certain characters are given: Toby’s fiance, Tybalt. Her squire, Quentin. Others return from previous books: her daughter, Gillian; and her friends Dianda and Patrick. And hints are given that others will become more prominently featured in future novels…but that would be spoilers.

Toby has a dry wit and sometimes faces situations with one part magic, one part intelligence, one part bravery, and seven parts sarcasm. Fortunately she heals from almost everything, so getting her own blood all over her own clothes is more a fashion catastrophe than a deterrent to solving the mystery. Getting skewered or stabbed or impaled or otherwise injured does still hurt, though!

The October Daye series was a finalist for the 2019 Hugo Award for Best Series. I suspect it might be nominated again, along with McGuire’s other series InCryptid (which was a finalist in 2018). If so, The Unkindest Tide will be one reason why this series continues to be among the best in urban fantasy.