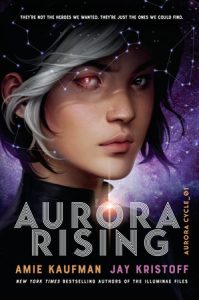 Amie Kaufman and Jay Kristoff wrote the international bestselling young adult series, The Illuminae Files. Now they have collaborated on what appears to be the start of a new series, Aurora Cycle. In Aurora Rising, Tyler Jones is a top cadet at the Aurora Academy. The night before he is scheduled to draft his team, the team that will serve with him in the Aurora Legion, he stumbles upon a ship that shouldn’t exist. Two hundred years before, the Hadfield had disappeared into interdimensional space, with 10,000 colonists lost. Now, Tyler has found the Hadfield, and there is one survivor. Aurora.

Lots of Auroras. But the critical one is the survivor. Aurora Jie-Ling O’Malley is a two-hundred year old teenager, having been in cryosleep ever since the Hadfield went missing. Soon after arriving at the academy with Tyler, she realizes that she is seeing things before they happen.

Tyler missed the draft because of his heroics, so he is stuck with a team comprised mostly of the people the other captains did not want. His pilot and his diplomat would have been his choices: his best friend and his twin sister. But the others…. His science officer is brilliant, but has the unfortunate habit of stunning her own teammates. His engineer is also brilliant, but sarcastic and difficult. And his military officer introduces himself to Tyler by punching him in the face.

Kaufman and Kristoff do an excellent job of telling the story in the different voices of the team members. Shifting back and forth between Aurora (she prefers “Auri,”) and the team, we see the story develop as the team takes their first mission and proceeds from there. Auri turns out to be the catalyst who may restart a war that had been cold for millennia–and Tyler’s team of misfits and rejects may be the keys to stopping or winning that war.

Aurora Rising is a space opera written for young adults. This not so young adult enjoyed it immensely. It is funny, snarky, just sciency enough to be interesting but definitely more plot and character driven than sci-fi geek focused. Young readers will enjoy the different characters, each of which is well-conceived and has a different voice. There are enough twists and turns to satisfy any reader. And there is danger and romance and tragedy and everything else you want in a novel. A fun read with surprising depth, Aurora Rising has risen to a solid place among my favorite novels of the year.