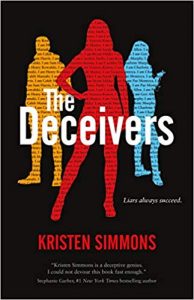 Brynn Hilder is trying to get out of her bad neighborhood. Her mother’s boyfriend, Pete, is a drug dealer. Her only hope is to save up money from her jobs to go to college. One of those jobs barely pays her to mop floors at night. Her other jobs, though, have more potential–and a lot more risk.

Pete may not be much of a stepfather (correction, “mom’s loser boyfriend”), but he has taught her how to grift. Brynn is good at it. She has saved up almost $2000 from conning people, enough to begin planning for a life away from home. But then Pete finds her stash, accuses her of stealing from him, and her dreams appear to end.

A lifeline appears in the form of an opportunity to attend the exclusive and private Vale Hall. The mysterious benefactor is Dr. Odin, a man who values achievement. Brynn’s achievements have been primarily running cons. This is not a problem, though, because Vale Hall is a school for con artists. Brynn is soon assigned a mark, the son of a senator. Before long, though, she begins to learn that it can be hard to separate lies from truths, and in a school of con artists not all of the marks are on the outside.

Kristen Simmons has created a complex world where nothing is quite what it seems to be. The names of characters and locations are intentionally evocative, though the ending is much happier than the myth. And hidden beneath the rapid fire dialog and fast paced plot is a deeper examination of truth and responsibility. Not that this is a lecture on honesty. It is an excellent story that does remind us that lies carry consequences. The truth may set us free, but there is a price to that freedom as well.

Brynn is a very relatable character. Despite being told in the first person, this middle-aged man was quite taken by the story of this teenage woman. The Deceivers has great characters, a complex plot, a romantic love story, and clever dialog. A fun and worthwhile read.