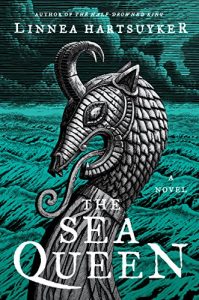 I follow several general rules for reading. I don’t read series out of order. I don’t start with the second book in a series. I don’t grab a book off the library recommended shelves because the cover looks cool. I seldom read historical fiction.

I violated all of those rules with The Sea Queen. I’m glad I did.

The major characters in this book were introduced in the first book of the series, The Half-Drowned King. Ragnvald is the King of Sogn, but spends much of his time fighting for King Harald who is seeking to unify Norway under his reign. His sister, Svanhild, is with her husband Solvi, who is one of Harald’s fiercest enemies. Ragnvald wants nothing more than to retire to his home and live in peace, but until Harald succeeds in uniting Norway, peace will remain elusive.

Hartsuyker bases her story on Viking myths surrounding the creation of the country, and the historical research and attention to detail shows. Viking life was gritty and often ugly. Death stalked them. Violence and disease were constants. Sewage ran in the streets and animals were housed in the same buildings as humans. The sanitized version we see at Epcot would be more foreign to actual Vikings than it is to us.

The Sea Queen is full of adventure. Sea battles and land battles. Political intrigue. Sex and violence. It is not always pretty, but the Vikings were not known for their daintiness. It is a well-written, well-researched, fun read. If you’re lying on a warm, sandy beach somewhere, The Sea Queen is a good choice to bring some North Sea cool to your vacation.