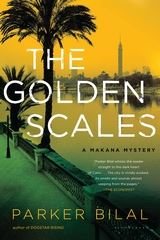 Seventeen years earlier, a young British mother visited Cairo in search of the father of her toddler daughter. Failing to find him, she returns to her hotel room. A delivery arrives for her: an envelope full of cash…and heroin. The woman loves her daughter, but the temptation of the drugs is too much for her. When she awakens, her daughter is missing, lost somewhere in the streets of Cairo.

Inspector Makana has lived in Cairo for seven years after fleeing Islamists in his native Sudan. He gets by financially as a private investigator, although the income is poor and sporadic at best. Then a man shows up in his home and takes him to the apartment of perhaps the wealthiest man in Egypt. A star soccer player is missing, the star of the team he owns, and he wants Makana to find him.

Despite the lengthy time difference between these crimes and the lack of any obvious connection, Makana comes to believe there is a connection between them. Discovering that connection might solve the crimes. It might also get him killed.

Parker Bilal is a pen name for author Jamal Mahjoub. Better known for his literary novels, Mahjoub uses the Bilal name for his Makana mystery novels. The Golden Scales is the first of the series, which now has at least six books. I am late to this party, but I am glad my library had the book on a display. Perhaps you can’t judge a book by its cover, but my local library (www.schlowlibrary.org) does know how to judge a good book. I am glad they put it on display, I am glad I checked it out, and I am looking forward to reading more of the series.

Makana is the sort of world-weary detective familiar to mystery fans. I am not sure if “Arab noir” is a genre, but if it isn’t then Makana could be the beginning of a trend. Makana may physically reside in Cairo, but Khartoum is never far from his thoughts. His wife and daughter were killed there. In Khartoum, before the Islamists took power, he was a respected homicide detective. In Cairo, he rents a raft (it does not really deserve the designation “houseboat”) and is constantly behind on his rent. His sense of right and wrong, though, demand that he do his best in every investigation and follow the leads wherever they take him.

Good mysteries give enough clues to let the reader solve the case along with the detective. Great mysteries still leave some twists at the end. This one gave enough clues in the body to let me solve much of the mystery, but also left a few twists to change direction on a couple of matters in the last few chapters. To my tastes, that makes for a perfect mystery novel.

I have never been to Cairo, but Bilal does a wonderful job of describing the city, from the jinn that wind through the empty lots (as a child in Colorado we called them “dust devils”) to the traffic that chokes the city with smog to the towering enclaves of the rich to the sprawling slums of the poor. Cairo has between 15 and 20 million residents, putting it into the top 20 largest cities in the world. That certainly gives it plenty of stories to keep any novelist busy.

Whether you are a fan of noir, a fan of mysteries, interested in a well-written story, or want to read evocative descriptions of an ancient/modern city, The Golden Scales is a great place to start. And since it is the first in an ongoing series, the fun does not have to stop there. I am definitely looking forward to moving on with this series.