Book Review: The Tropic of Serpents, Book 2 of the Memoirs of Lady Trent, Marie Brennan 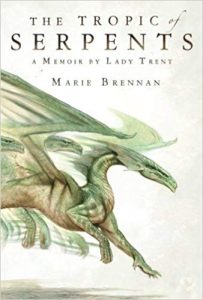 Isabella Camherst can face dragons. She has met with heads of state, with scientists from around the world. She survived the cold steppes and the machinations of local warlords, and as we learn in this volume she triumphed over the savannahs and swamps of Eriga. Early in this book, though, she faces her most formidable foe of all.

The Tropic of Serpents is the second volume of the memoirs of Lady Trent, a fantasy series set in a Victorian-type era where real men are men of breeding and education, and real women stay home and mind the household. Unless you are Lady Trent. Accompanied by a companion from her previous journey (a man, but not a man of breeding) and by a runaway heiress, Isabella sets forth to the continent of Eriga, home to lions and elephants and leopards and several kinds of dragons.

In Eriga she must navigate her way through palace intrigue, through political waters muddied by foreign influences (including those from her home country of Scirland), and eventually through the swamps of the “Green Hell,” the jungle home of a rare and surly type of dragon. She courts danger and scandal and finds plenty of both.

Marie Brennan’s delightful character must deal with converting skirts to trousers, being confined with other women during her menstruation, and other issues that are gender related. Brennan does a great job remaining true to the Victorian-era sensibilities, once with Isabella apologizing for the rough language of calling something a “godsend”; one shouldn’t use the Lord’s name in vain, although in fairness that is what the man said and neither the man nor Isabella are particularly religious. The book is at times whimsical, at times serious. Always, though, The Tropic of Serpents is a wonderful story about a very well-drawn character.

Book Review: The Tropic of Serpents, Book 2 of the Memoirs of Lady Trent, Marie Brennan