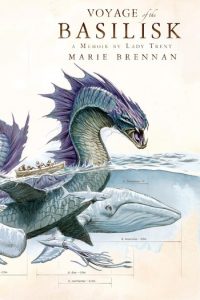 The Memoirs of Lady Trent is a fantasy series that grows more delightful the further you get into it. In Voyage of the Basilisk, the third of the series, Isabella Camherst sets sail to new seas and mysterious islands on board the royal survey ship Basilisk, and seeks to answer questions that were raised about affairs both scandalous and political.

She is accompanied on her voyage by her longtime colleague Tom Wilker–professional colleague only, it should be noted–and by her son Jacob and his governess Abby. Along the way she has occasion to study sea serpents in both the arctic and the tropics, and fire lizards on the volcanic islands they inhabit. She also runs afoul of various bureaucracies, as she is prone to do, and inadvertently courts scandal through her (professional and platonic) relationship with a foreign archaeologist. But, people will talk. Meanwhile, we learn more about dragons and their kin, we see her relationship with her son develop, and we learn more about the political intrigues that keep her fellow Scirlings busy and create opportunities for Mrs. Camherst to find trouble.

Throughout, we see the challenges Isabella faces due to her gender. Her society, a sort-of Victorian culture, devalues Tom Wilker because he does not come from a family of breeding and nobility. However, a male commoner still carries more weight among intellectuals than a female. Even when that female is from the nobility, and even after that female has proven herself through multiple trips of discovery and papers published. Isabella finds that her notoriety and scandal seem to attract more attention than her scholarly efforts, and despite the fact that the scandals are mere gossip and not based in actual misdeeds she is constantly faced with her alleged affairs being of more interest than her academic affairs.

I was reminded of a recent photo of a scientist involved in a complex space endeavor. The photo went viral because the scientist was “cute,” rather than because she was brilliant. I suppose the value of a photo over that of an article will typically lie in the attractiveness of the subject, but it is a shame that the scientist’s contributions (which were invaluable) were somewhat muted by the focus on her appearance, and as she herself noted, the contributions of her team were largely ignored because of the emphasis on her. I have never noticed a male scientist’s photo going viral because he was “hot,” or really any more than a cursory description of appearance in any male scientist’s profile. That seems to be a burden for female scientists, to be judged by gender and appearance as well as for any contributions they are making to their fields.

Lady Trent’s memoirs are designed to put the record straight. The only affairs she engaged in were academic affairs of studying dragons, and affairs of state that she stumbled upon. Her relationships with men were collegial and professional, and if they were friendlier than is proper in staid Scirland that is only because of long association and tight quarters and not because of impropriety. The gossip that may have swirled about her is just that: gossip. It is not true, and it speaks more of the bearer than it does of her or any of her companions.

Just in case there were any doubts.

Voyage of the Basilisk continues the approach of first person memoir from a proper Victorian-esque lady. If at times there are long discourses on the nature of dragons, that is to be expected from the writings of a natural historian. Like its preceding novels, Voyage is breezy fun that invites the reader into a fascinating world of proper etiquette and sometimes quite improper dragons.

You may also enjoy —