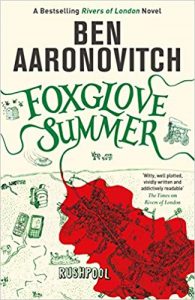 This fifth installment of the DC Peter Grant series of books brings London’s very most junior detective wizard to the country. Two young girls, age 11, have gone missing. Since on very rare occasions children are used in evil magical practices, DC Grant is sent to rule out involvement by an elderly retired wizard who lives in the area. Although he quickly determines that the wizard played no part in the disappearance, Grant offers to stay to help the local force in their search. He is a policeman, these are children whose lives are at stake, and so it is all hands on deck.

When the girls’ phones are found, though, they show signs of having been affected by magic. This puts Grant at the center of the investigation, and although the retired wizard may be innocent there are other magical forces at play. Aided by the arrival of his sometime love interest, Beverly Brook, goddess of a small river near London, Grant looks into local phenomenon that might explain where the girls had gone. There is the wizard’s mysterious daughter, who has a way with local bees and with local boys. There are the local water goddesses, who are less than pleased with Beverly’s arrival for reasons they will not explain. There are the occasional texts from his former partner who betrayed him to side with an evil magician. And there is the strange rumor that one of the missing girls had an invisible friend. Not imaginary–invisible. In other words, plenty of things to keep an investigator of the paranormal busy.

Aaronovitch’s writing is delightful. His plots are involved but not muddy, his characters are complex and interesting, and his prose is crisp and sometimes hilarious. He weaves in some pointed social commentary with a deft touch of humor through his examination of race as a factor in Grant’s work. Grant finds himself the only person of color involved in the search for the girls (until Beverly arrives). This gives him the opportunity to practice his diversity training, since working with all white rural police and citizens provides multiple cultural cross-currents. Fortunately he manages to avoid conflict even when some of the less broad minded citizens seem bent upon fomenting it.

The world building in this series is quite elaborate, and moving the setting to the country allows Aaronovitch to add multiple layers to the work he has already established in London. Grant approaches magic from a scientific mindset. He likes to reason out how and why magic works. In the city, vestigia or echoes of magic remain observable (to the trained) on hard surfaces: stone, metal, plastic, and to a much lesser extent flesh. In the country, though, with dirt and plants, how is magic absorbed…or is it? Are magical beings visible only in certain types of light? Is there a parallel fae world existing essentially overlaid on the mortal world? Those are questions that did not require a full answer on the streets of London, but in this rural setting they become central to the search for the girls.

Foxglove Summer is a nice addition to a series that is fun and fascinating. It is one of the best urban fantasy series I have ever read, made even better by this sojourn out of the city.