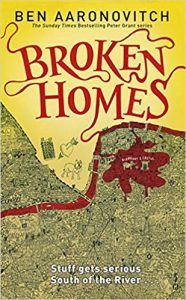 Detective Peter Grant is becoming stronger in his magical powers, more confident in his detective work, but still is not allowed to drive DCI Nightingale’s jaguar around the streets of London. Nor is he very good at telling the future, like when a river goddess suggests she may start a flood, she may actually start a flood. Still, it was a small flood, insurance paid for most of it, and that really wasn’t his fault. Probably.

Broken Homes is the fourth book in what is quickly becoming one of my favorite series, The Rivers of London. Aaronovitch has quirky and likeable characters interacting in believable ways–that is, once you accept the premise that there is an entire magical London living among and amid the ordinary human residents. It makes sense that this magical London would have dedicated police officers who work to capture rogue wizards and witches, keep the peace between various magical factions, and above all prevent ordinary humans from realizing they are surrounded by magic.

Peter, Nightingale, Lesley, and the rest of the crew (including Toby the dog) are trying to solve multiple crimes when they realize that those crimes are related. We see the return of a witch they faced in a previous novel, but here they find out she is much more powerful than they had realized before. They also find clues that the “faceless man” is becoming active again, a powerful wizard who nearly killed Peter during their last encounter. Not even Nightingale is certain he can be beaten, which gives Peter and Lesley increased urgency in their training. When they are required to move into a building to investigate suspicious activity, that brings them face to face with their most challenging enemies.

Aaronovitch has built a terrific sandbox in this Rivers of London series, and invited all of us to play in it with him. Broken Homes is a fun and easy read. Well worth the time.