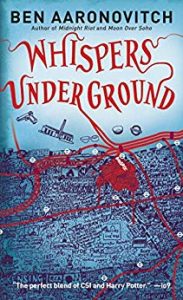 Peter Grant got his start in the police department that handles magic by interviewing a ghost who witnessed a murder. So when a young girl who lives near his parent’s apartment says she has seen a ghost, he can’t really ignore her request to come investigate it. This is the first supernatural visit to London’s underground that DC Grant and DC Lesley May make. It won’t be the last.

Whispers Underground is the third installment in a terrific series, Rivers of London. Ben Aaronovitch uses a lot of humor and terrific characters to tell a magical story. After investigating the ghost young Abigail has found, they are called to investigate a murder, a young man stabbed by a piece of pottery. The pottery has traces of vestigium, the echo left by magic, an echo that only those trained in magic can usually sense. Grant and May are part of the Metropolitan Police Force’s department that handles magic and the supernatural, and they are now part of a high profile case.

The victim is an American art student, the son of a US senator. This means that the FBI has a vested interest in the case, and despite his quite junior status on the team the agent decides that Grant is the one she should focus on. Scotland Yard may have a division focusing on magic, but it doesn’t LIKE having that division, and especially doesn’t like admitting that they have that division…or even admitting that magic exists. They certainly don’t want to share that information with their friends across the pond. This makes things awkward for Grant. He is charged with investigating a crime involving magic, underneath the watchful observation of an FBI agent, without revealing that magic is involved or even that magic exists.

Aaronovitch continues his often hilarious storytelling style in this wonderful series. The humor is quite dry. In some ways this was the most “British” of the novels, with no efforts made to translate the British idioms into American ones for us colonists. For me that adds to the charm. I don’t mind looking up words that I don’t know. If I am going to read a book set in London, written by a writer living in London, I may as well experience the full effect. A trip to London is on my bucket list…but for now I will have to settle for the vicarious experience through fiction.

This series continues to delight. Through wit, compassion, and maybe a little magic, Aaronovitch gives us an urban fantasy that feels very real. His characters are wonderful, his setting is vivid, and his stories are imaginative. It’s hard to ask for anything more in a book.