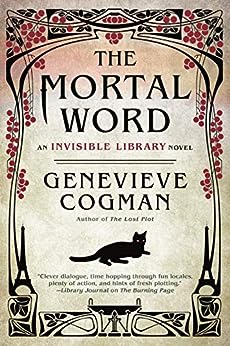 The Invisible Library has become one of my favorite series, and a new book by Genevieve Cogman is a delight I look forward to enjoying as often as it comes. The Mortal Word, the fifth book in the series, is possibly my favorite one so far.

Irene has just returned to London and is visiting her friend, renowned detective Peregrine Vale, when another librarian summons her and Vale to investigate a murder. A secret peace conference is going on between mortal and historic enemies, the dragons and the fae, and the librarians are mediating the conference. However, the entire conference may fail now that one of the senior assistants to the dragons has been murdered. Is this an untimely random crime? Is a rogue outside element trying to disrupt the peace conference? Or is something darker at play?

Irene, Vale, and her former assistant Kai are caught up into the intrigue surrounding the conference. All the players have their own agendas, and being magical beings sometimes their agendas become reality by the strength of their desires. Add in the beauty of Paris, the chaos of some anarchists, a fae witch who likes to bathe in the blood of virgins, and a librarian with bold plans for a new library mission, and you have a whirlwind adventure that spins from attempted kidnapping to attempted murder to a final confrontation between the powers of order and the powers of chaos.

Irene is the powerful center of this story, as she is in all the novels of the series. In this book, though, she seems to be more comfortable with her own power. She recognizes that although the investigation is to be led by Vale, she must be the driving force behind it. She realizes that the fate of her parents and the library itself rely upon her judgment and actions. She handles herself with deportment when faced by the powers of dragons and fae. And she works to save the conference and the attendees even in the face of opposition from fellow librarians. In short, the heroine we’ve seen developing through books 1-4 is beginning to not only act like the kickass leader she is, she is beginning to believe in herself as well.

All in all, The Invisible Library series is getting better as it ages, and The Mortal Word takes the story and the characters in some very good directions. Irene gains confidence in herself, is acknowledged for her gifts and leadership by others, and Cogman succeeds in crafting another exciting story in a series filled with them.

For more on this series, also see: