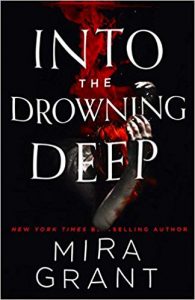 A few years ago I read the novella Rolling in the Deep by Mira Grant. It was one of the most frightening books I have ever read. I seldom read horror. My imagination tends to feed nightmares when I do. Rolling in the Deep, though, was a true science fiction horror, along the lines of the movie Alien: mermaids (more accurately, sirens) attack and literally everyone dies. Every. Single. Character.

So, obviously, a sequel was needed. And, admittedly less obviously, I had to read it.

I don’t mean to sound snarky. A sequel was needed, because the first book was that good. That’s also why I had to read it. Mira Grant, a pen name for author Seanan McGuire, is a brilliant writer under either name. Under her own name she usually writes urban fantasy. Mira Grant is more of the science fiction/horror genre. Under either name, though, you can expect excellent writing, gripping plots, fantastic character development, and someone dying. Often, a lot of someones.

Into the Drowning Deep tells the tale of the follow up mission to that ill-fated voyage. The company that funded the first is a television network that wants to prove the existence of sirens. They have pulled together a team of marine biologists, oceanographers, cryptozoologists, and various other disciplines. They have also brought some big-game hunters and armed security guards, and obviously some on-air talent and videographers. Among the scientists is Victoria “Tory” Stewart, the sister of Anne Stewart, a victim of the first mission.

Tory is hoping to gain some understanding as to how and why her sister died. Part of what Grant does so well is explore the motivations behind different characters. Some are straightforward: a Ph.D., tenure, fame, recognition, wealth. Others are more complex: validation, understanding, purpose. By the end, though, they all have one common motivation: survival. Because the sirens are coming, and they like the taste of human flesh.

Into the Drowning Deep may do a better job than any fiction book I have ever read at giving voice and empowerment to characters with different abilities. Two of the scientists are deaf. The on-air talent is on the autism spectrum. The man representing the network has a severe back and leg injury. Every one of these characters brings talent, intelligence, and courage to the fight against the sirens. That is not to say their challenges make things easy: one of the deaf scientists is killed, and another is left alone in a room because she cannot hear the alarms. The injured representative is stuck in a chair when he cannot access his medicine, and only timely access to THC-laced chocolates keeps him from incapacitation. But these characters are on the ship because of their talents and abilities, and those talents and abilities become more valuable as the ship is under siege.

If you are easily freaked out, do not read this book. If you cannot stand blood and gore, don’t get it. But if you are fascinated by the thought of encountering a different intelligence, one that has been part of human mythology worldwide, one that has neither love nor hatred toward us but rather one that thinks we are rather tasty, the Mira Grant has the perfect novel for you. Creative, bold, creepy, and really, really good.

I’m sure I’ll be able to sleep again. Someday.