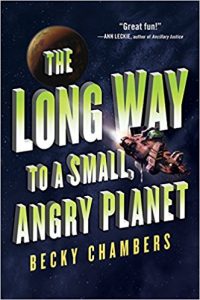 The Long Way to a Small Angry Planet is a fun but thoughtful journey with the crew of the Wayfarer, a ship that bores wormholes through space to allow ships rapid transport between inhabited stars. The crew is quite diverse. Captain Ashby Santoso, Kizzy Shao, Jenks, and newbie Rosemary Harper are humans. The pilot, Sissix, is an Aandrisk. Dr. Chef (medical officer and cook) is a Grum. Ohan are a Sianat pair, and they serve as navigator. And Lovey is a sentient AI. Balancing the needs, wants, feelings, and skills of these species and individuals is challenging enough during the regular jobs, but when they have the chance to take on a larger job which has them traveling together for almost a year, things get quite interesting.

Becky Chambers does an amazing job building a world (well, galaxy) filled with very different and sometimes barely compatible people. AI may be sentient, but they are not regarded as “people,” and it is illegal to download a sentient AI into a physical body (normally they serve as the computer assistants for ships, buildings, and other similarly large and complex structures). When Lovey and Jenks fall in love, though, they might be willing to break that law. Aandrisk have the appearance (to humans) of feathered reptiles. They are very affectionate with each other and with their friends. On their planet, sex is a normal part of interacting with others, which makes traveling with the (by comparison) much more prudish humans a real challenge sometimes. The Grum are going extinct as a species. Only a few are left after centuries of war and genocide, and they have decided themselves that their crimes as a species are too great to allow them to continue in the galaxy. The Sianat are always referred to in the plural: they are a hybrid of an individual and a virus which allows them to navigate between space, the area where wormholes travel, but also dramatically shortens their lives.

The humans themselves are almost equally diverse. Rosemary grew up in privilege on Mars, but fled to escape her family name after her father was arrested for arms trafficking. Ashby spent his entire life shipboard and is uncomfortable on planets. Kizzy is bubbly, excitable, and friends with almost everyone. Jenks is extremely short, rejected as a child by people who believed that genetic misfits should die. Corbin is an unpleasant recluse, much happier tending his algae than interacting with others.

During their journey they face a variety of challenges: their ship is attacked and many things are stolen. They are stopped by an alien government that arrests Corbin. Ohan become sick. Dealing with these problems brings the crew together in new ways, finding strength in themselves and in each other that they did not know was there, realizing that family is not just the group you are born into or the species you are born from, but it is the people who are there when you need them the most.

Although Chambers works hard to build a consistent scientific framework, this is not a book to read in hopes that faster than light travel has been secretly figured out by a lone author working in her study. The magic of Chambers book is in the relationships between the characters and the histories of the species. Earth has been largely destroyed by pollution and global warming, so it was abandoned in two stages. The first stage was mostly rich people relocating to Mars. The second was the “Exodan,” multiple ships carrying the remainder of Earth’s population out of the solar system in a desperate attempt to find a new home. This second wave of refugees was not welcomed on Mars, and only an alien ship stumbling on them saved the bulk of humanity. Although efforts have been made since, there is still a vast gulf dividing the Solans (people born and raised in Earth’s original solar system) from the Exodans. That kind of effort to create new cultures is brilliant and amazing, and Chambers excels at it.

Chambers has published two sequels, which I will soon review, but this first book (2015) is so good that you should read them in order. The Long Way to a Small Angry Planet is a trip well worth taking.