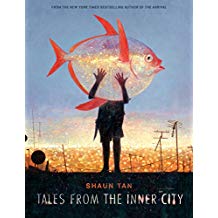 I’m not sure I have ever used the word “luscious” to describe a book before. I probably would not use it often. I will use it here. Shaun Tan’s Tales from the Inner City is luscious. Beautifully illustrated, rich, poetic and surreal, it is a visual and lyrical journey into a series of imaginary realms exploring imagined relationships between humans and animals, relationships that don’t actually exist. Some of them we can be grateful are entirely imaginary. Others, it might be nice if they were real. Either way, the paintings Tan pairs with each story or poem are gorgeous and give a visual dimension to the words that makes them even more vivid.

It will be impossible in this review to do justice to the Tales from the Inner City. It is worth buying just for the pictures. Tan is known for his graphic novels and children’s books, and won an Oscar for his short film The Lost Thing. Clearly he is comfortable with visual communication, but don’t think for a moment that the visuals detract from the words. If this were just a collection of short stories and poems it would be worth getting. The fact that Tales from the Inner City has both gorgeous and (again) luscious paintings illustrating creative, poetic, and surreal stories is almost unfair to other books.

Tales from the Inner City starts with a story about crocodiles living in a skyscraper. On the eighty-seventh floor. Most people do not know they are there, and the crocodiles themselves do not seem to know (or care) that they are in a skyscraper as opposed to a more traditional crocodilian location. Many of the stories follow this kind of strange, absurd premise. One of my favorite stories is of a family that goes fishing in the sky…and catches a moon fish. The painting illustrating this story is also on the dust jacket of the hardcover, a silhouette of a man holding a large silvery, glistening, light-filled fish with orange fins. Horses, unseen by adults but obvious to children, gallop across the skyline of a city. Pigeons live and raise their young in nests built in a flying bank. Owls wait with patients in hospital, assuring them of their constant care. These stories, some whimsical, some poignant, some eerie, some all of those together, tell of a world with magic and wilder than we usually imagine.

Most of the stories have just one painting illustrating them. An exception is his metaphor of wolves becoming dogs. More of a poem than a story, Tan writes,

One day I threw my stick at you.

You brought it back.

My hand touched your ear.

Your nose touched the back of my knee.

Then we were walking side by side

as if it had always been this way.

The poem follows the two, human and wolf/dog, together until they are separated by death. Death, though, is imagined as a road or path or river to cross…and the wolf/dog waits on the other side for their human to join them so they can walk together into the next adventure. Illustrating this is a series of paintings of different people and different dogs/wolves separated by different paths. The poses are the same, but everything else is different from one painting to the next. Then, finally, paintings reflect the reunion of the two as they walk together away from that place of separation. I know a lot of dog-lovers who would cry at this story.