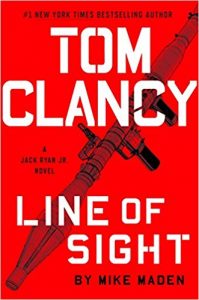 Fans of Tom Clancy’s Jack Ryan series know that the world Clancy created continues in a series of novels about Jack Ryan, Jr. Using his cover as a financial analyst, Jack and his colleagues at the Campus serve as an off-the-books intelligence agency for his father, President Jack Ryan. In this latest offering, Line of Sight, from a new author to the series, Jack is sent on a mission of a different sort. His mother, eye-surgeon Cathy Ryan, hears he is heading to central Europe. She asks her son to look up an old patient of hers, Aida Curic. Dr. Ryan had operated on the little girl twenty years earlier and wanted to know how she was doing.

Jack’s trip starts in Ljubljana, Slovenia, where he has a financial consultation–and where he faces an attempt on his life by a beautiful hit woman. After successfully turning the tables on her, he flies to Sarajevo to look for Aida Curic. After several days unsuccessfully searching, Curic shows up on his doorstep, and the two of them quickly connect.

I do not believe in doing negative reviews, but I do have a couple of criticisms of this book. I am a red-blooded cis straight male, but wow! One character is described as a busty blond girl-next-door. Jack’s would-be assassin, or more accurately his first would-be assassin, is a beautiful woman who attempts seduction as her prelude to murder. When Aida Curic shows up on his doorstep, her curves are described in vivid detail–and in very short order Jack and she begin an affair. Given that both her Muslim faith and his Catholic faith are supposed to be central parts of their characters, and furthermore that Ryan is supposed to be a highly trained and disciplined operative who (we would think) is already on his guard after an attempt on his life, this seems more James Bond than Jack Ryan, Jr.

The other is probably more of a general criticism of the entire series, but it does specifically apply to this book. Recent novels in this series have been less overtly political–maybe because they were written during an era when Democrats were in the real White House. This book feels at times like a Republican campaign commercial. Granted, you don’t go into a Tom Clancy novel expecting subtlety or nuance in its politics, but the tone is much stronger in this offering, and I found it occasionally distracting.

Those criticisms aside, Maden checks the boxes for a Tom Clancy thriller. Multiple intractable foes, bringing both personal danger and global destabilization. The hero needing to use his spycraft, his brilliance, and his physicality to resolve the situation. Familiar names from the Campus bringing their skills to the party. (Though this book does spend much less time with other characters than other authors in the series have.) President Ryan and his cabinet being on-top-of-everything-in-amazing-fashion. These are expectations that fans of the series have, and Maden delivers.

Something else that Clancy fans have come to expect is detailed exploration of challenging subjects, whether that is the specs of a Russian sub or the destructive capability of a jumbo jet crashing into a government building. Maden writes with impressive sensitivity and detail about the aftermath and political consequences of the Balkan wars. NATO, America, and Western Europe may not have had any good options during those wars, but the failure to act and the refusal to protect civilians led to the worst atrocities and genocide seen on the continent since World War II, and the scars are still fresh in the region.

Tom Clancy Line of Sight is not a perfect novel, but it is a worthy continuation of a series that has entertained generations of readers since the 1980s. I look forward to seeing how the Ryans and the Campus next save the world–though Jack may want to ask a relative to set him up with dates in future books!