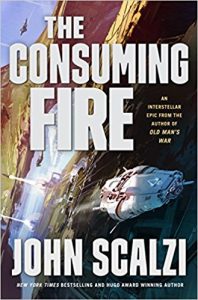 Emperox Grayland II is in deep. Most believe she is in over her head. She is the unexpected, unprepared ruler of the Interdependency, a series of worlds held together by their mutual need for each other and their connection through the “flow,” a poorly understood current outside the bounds of normal space which allows travel between select points in normal space. Humans cannot control the flow. They can access it in certain areas, then exit back out from it in other areas, but they are utterly dependent on the direction and current of the flow itself to get from one system to another.

But the flow is changing. Places that were connected to each other are losing that connection. Few know this, fewer accept that it’s happening, and fewer still believe the Emperox’s latest pronouncement: she has had a vision of the flow ending. Beset by enemies, facing inevitable environmental catastrophe, ill-prepared for the throne (she became Emperox because of the untimely death of her older brother who was the heir), and now of questionable sanity, it seems only a matter of time before her accidental ascendancy comes to an abrupt and likely terminal end. The question is whether humanity itself will be snuffed out in the consuming fire.

In The Consuming Fire, John Scalzi continues the story begun in The Collapsing Empire. We pick up the threads of Emperox Grayland II; of Lord Marce Claremont, the scientist who brought predictions of the flow’s end to the Emperox; of Lady Kiva Lagos, unlikely ally to the Emperox who loves money and sex with near equal fervor; and of Lady Nadashe Nohamapetan, in jail for a failed assassination attempt but still with cards to play in the game for power and control of the Interdependency. Scalzi weaves these threads together against a backdrop of impending environmental doom. Only one planet in the entire empire is self sustaining. All of the others were settled because of their locations near access points to the flow. None of them are naturally inhabitable. They all rely on each other for something: food, air, water. When the flow is no longer there, they will continue for awhile. But the end will come, sooner rather than later, and everyone will die.

Scalzi wrote The Consuming Fire in a two-week burst in June, 2018. (He does NOT recommend this as a model for writing a novel!) Given the timing, during a US election year and in the middle of political battles over climate change, it is easy to see parallels between real life and this book. But don’t think this is simply a parable for modern readers. The characters in Scalzi’s works are involved and complex. The universe he has created for them may face environmental challenges, but these are also people who forced hostile planets and empty space to make room for them. The Interdependency has involved and interconnected political, social, economic, and religious systems, and their differences from any current situation are as significant as any similarities we may see.

It may be a couple of years before the next book in this series is published. Considering that the author has multiple active series going at this time, he should be able to keep himself busy until then. I look forward to returning to the Interdependency, though. The Consuming Fire is full of the typical Scalzi wit and irreverence, and is a page-turning space opera that hurtles toward an exciting and climactic finish. If the next installment is as enjoyable as the first two have been, it will be worth the wait.

Even if it takes him three weeks to write it!