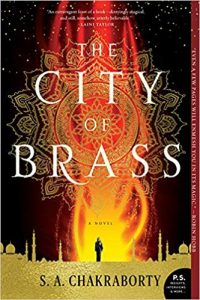 The City of Brass is as lush a story as you will find in modern fantasy. S.A. Chakraborty has somehow managed to create a world that is as magical as Arabian Nights with characters that relate to a very modern mindset. The result is beautiful, rich, and promises much more to come.

This debut novel was nominated for both a Locus Award and a World Fantasy Award, and has been recognized by several journals as one of the best books of the year. Filled with characters that are both heroic and flawed, the story follows the lives of two characters who live very different lives. Nahri is a thief and con artist who does not believe in magic. She lives by her wits in Cairo, convincing people that she can heal them in exchange for money. Oddly enough, though she does not believe in magic, she actually can heal people. She can also understand any language she hears. Those two talents come together unexpectedly and horribly when she tries to heal a girl possessed by an ifrit, and finds that she can understand the demon inside the child. This leads to a harrowing confrontation, where she is unexpectedly saved by the appearance of a djinn. He takes her on a long and dangerous journey to the city of Daevebad, where they hope to find answers to the questions raised by her extraordinary talents and her lack of memory.

Ali is a prince in Daevebad, torn between his love for his family–especially his older brother, who will someday become king–and his pity for the oppressed in his city. When he tries to help the people of his city, he is unwittingly betraying his father, the king. But when he fulfills his duties to the crown, it often comes at the expense of the most vulnerable within the city. These tensions are not eased by the arrival of the mysterious Nahri and her ancient companion, a historic enemy to the throne returning at perhaps the worst possible time.

Chakraborty does a masterful job of creating a world that is filled with terror and wonder, danger and delight. Her descriptions of the desert are compelling and real. The heat and dryness, the contrast with places of oasis, the vast distances (even by air carpet) that separate city from city, all carry echoes of other stories set in the desert yet are uniquely her own. The confrontations with the ifrit are terrifying, truly the stuff of nightmares. You can almost taste the dust of Cairo, feel the heat of the desert, and hear the bazaar of Daevebad. I almost felt like wiping the blood off the desk after reading a fight scene between two of the characters. Love and betrayal and kindness and cruelty are the coin of this realm, and Chakraborty’s characters spend all they have and more to reach their goals.

Chakraborty also rejects the temptation to answer every question, leaving much to address in the sequels to come. She lets her characters face temptation and fail. Nahri is human–or is she? Ali is loyal to the crown–or is he? Is Nahri’s rescuer a hero or a monster–or could he be both? These are among the questions that are asked, then answered, then have the answers revealed as inadequate. Without revealing too much, I will say that the characters we meet and think we know at the beginning of the book are very different by the time we reach the end of this story–and I cannot wait until the next book comes out in January. (I have already requested it from our local library, so hopefully I am first on their list when it arrives!)

Despite occasional scenes of violence, this is a beautiful adult fantasy that would capture the imagination of younger readers as well. Nahri is as well-crafted a heroine as you are likely to find. Ali is the warrior/scholar that many young men might dream of being. Though neither character is as good–or bad–as they may seem at any given point of the story, both are intriguing and unique and delightful and infuriating and so well written. If you like great stories, if you like beautiful settings, if you like fascinating characters, and if you like really good novels, The City of Brass deserves a place on your shelf.