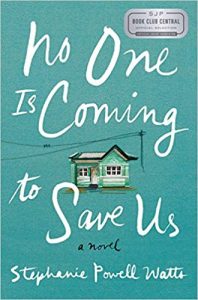 Fiction: No One Is Coming to Save Us, Stephanie Powell Watts

JJ Ferguson. The boy who made it. JJ had been the orphaned foster child who lived nearby. He knew Devon, befriended (and loved) Ava, and adored Sylvia. He had been gone for years, made some money, and was now coming home. He built a large house on the top of the hill, bigger than the houses of the white folks, nicer than the houses of the white folks, the local boy who did well. And in coming home he is bringing the echoes of a lost past, the mists shrouding paths not taken, and the dreams of a future that may never come.

Watts tells the story of these women and the men in their lives: the beautiful but dissolute Henry, the cad Don, the absent Devon, the once absent and now present JJ. She reveals their sharp edges and their lost dreams, their failures and their ambitions, their longings and their realities. She neither judges nor exonerates. They are who they are, warts and flaws and lusts and longings and fears and joys. And as they rub against each other, often rubbing raw and leaving each other bruised and bloodied, they reveal the painful humanity that unites us all. These characters may be African Americans struggling to make financial ends meet, but their desires and depths are common to people of all ages and races and strata. Watts’s characters are both black and universal, both poor and universal, both coastal Carolinian and reflective of people from any place and any time.

And her language sings! Even in her descriptions of incidental characters, she uses words to paint frescoes. On a single page, two little girls are said to be taking “small bites that might register under a microscope. It was clear to anyone who had ever been a child that they hated everything on their plates.” Weren’t we all those little girls, once? I remember plates like that, and I’m a middle aged man! Later in that same paragraph, those girls’ father and grandmother are described. Their grandmother “spit out” their father “identical to her and slapped a big porn star-approved mustache on. Never have you seen two separate people more alike. Both happiness killers. If they came close to a flicker, a spark of happiness, they’d stamp it out quick before it spread.” I know I’ve met those same people. Most of us have. We just didn’t know the right words to describe them, until Stephanie Powell Watts did it for us.

No One Is Coming to Save Us is beautiful, with memorable characters who are as universal as they are unique, and with language that appeals to all the senses. Read it–and keep a tissue box handy.