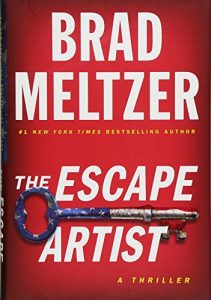 The Escape Artist is Brad Meltzer’s latest thriller. Coming twenty years after The Tenth Justice, his new work shows a greater familiarity with his craft and introduces some interesting characters as well.

Jim “Zig” Zigarowski is a mortician at Dover (DE) Air Force Base. Preparing deceased military service personnel for burial is his job, and he is quite good at it. Usually the deceased are strangers, but when a young woman who knew his daughter dies in a plane crash, Zig insists on taking care of her himself. However, the body on his table is not that of Nola Brown, and the mix up is not accidental. Zig begins looking for Nola, and soon finds himself in the midst of a mystery that takes him back to his Pennsylvania hometown, to Washington, DC, and back again to Dover. His journey uncovers secrets and crimes that some very powerful people would rather keep covered, and reopens some wounds within him that he thought were closed.

Nola Brown was supposed to be on that plane, but switched places at the last minute. She suspects the plane crash was meant to kill her. Instead, it killed her friend and several other people, including the Librarian of Congress, who was a close personal friend of the president. She is eager to get to the bottom of things, too, but she also must confront both external enemies and internal memories to solve this mystery.

Zig and Nola share part of their history, connected through Jim’s late daughter. Still, they do not really know each other. Part of their challenge is learning to trust each other and work together. This journey may cover more ground, metaphorically, than the two must cover in their search to find out who was behind the fatal plane crash.

Brad Meltzer is a prolific and popular writer. He has had best selling books in many categories, including novels, advice, childrens, YA, and non-fiction. He is also the host of two shows airing on the History Channel networks.

The Escape Artist is an interesting and engaging book featuring a strong heroine. Parts of it are formulaic, and the characters flaws sometimes overcome their features, but overall the effect is positive. Definitely a great book for fans of Brad Meltzer and for fans of the thriller genre, and not a bad introduction to the genre for those who like to see smart, tough women overcome challenging circumstances. Unlike many thrillers, The Escape Artist does not use women as mere foils for the male characters. Nola has her own brokenness, her own issues, and she is truly a co-protagonist with Zig. Neither of them survives this case without the other, and both of them are changed by the other.