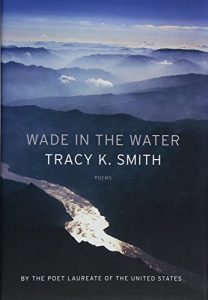 One of the women greeted me.

I love you, she said. She didn’t

Know me, but I believed her

I love you in the water

Where they pretended to wade,

That dragged us to those banks

And cast us in.

This may be a reference to the spiritual “Wade in the Water,” which repeats the chorus,

Wade in the water.

Like the spiritual, the poems of Wade in the Water speak to the longing and pain of a people familiar with oppression. Smith’s mother was a devoutly Christian woman, very religious in her practice. Smith’s father worked on Hubble space telescope. With one foot in the sciences, one foot in faith, and firmly rooted in the African-American experience, Smith’s poems expose a world of hurt and longing, a world of hope tempered by experience with regret. The woman who greeted her with “I love you” appeared to mean it. The speaker believed it. Yet it goes on to say that this greeting’s result was “a terrible new ache/Rolled over in my chest…she continued/Down the hall past other strangers,/Each feeling pierced suddenly/By pillars of heavy light.” Love, real love, unconditional, freely given love, warmly and openly gifted, yet opening a wound in the recipient who knows that the vulnerability love requires exposes a lifetime of hurt.

Wade in the Water is separated into four sections. The first set (which include the titular poem) have a strong spiritual and cosmological bent to them. Poems titled “Garden of Eden,” “The Angels,” “Realm of Shades” hint at the deeper perspective. These poems talk about God, about “the holy,” about angels, not in a sense necessarily recognized (or likely approved) by any specific denomination, but more about the acknowledgment of a world beyond the visible. These are not church-lady poems, intended to celebrate faith or reinforce commitment. These poems acknowledge ugliness in this world and see God more as a curious but ultimately disinterested observer of the earth and the human condition, mildly appalled and disgusted sometimes but not involved or willing to participate in the squalor he sees.

The second set are historically based “erasure poems.” These poems take historical American documents, including the Declaration of Independence and several letters from black Civil War soldiers and veterans, and “erase” parts of them to put them into poetic form. In some ways, these poems seemed to be the most personal. Highlighting phrases from Jefferson’s declaration gives them new visibility and power, and in this context reminds us that although those words speak eloquently to the plight of all oppressed peoples, they were written by a man who owned slaves and sold his own children borne by the slave he repeatedly raped.

The third set is more contemporary and overtly political, giving voice to ongoing pain experienced by people today. “Unrest in Baton Rouge” opens with the powerful lines, “Our bodies run with ink dark blood./ Blood pools in the pavement’s seams.” “Watershed” looks like it may be a hybrid poem including erasures from DuPont Chemical memos and legal briefs, telling the effects of corporate indifference to the poisoning of people and animals by their products. I suspect the lawyers and corporate officials who wrote those messages did not realize how poetic or how prophetic their words would become.

The final set seems more personal, including a beautiful tribute called “4 ½” to a child who reminds me of many other 4 ½ year olds I’ve met. Delightful, exasperating, whimsical and serious, this child clearly brings delight and mirth simply by being. These poems do not avoid broader themes, but they bring those themes home to the experience of the individual.

Smith’s poems are beautiful. They reflect a world that is not always beautiful, that is often ugly and cruel and capricious and evil. The reflect a failure of institutions, of governments, of corporations, and of the supernatural to protect the defenseless. Indeed, far too often they oppress the very people they claim to serve. But in revealing these scars on our history and on our society, Smith gives voice and meaning to those who’ve endured them. Her topics may not be beautiful, but her poetry is. Wade in the Water troubles the waters, revealing depths in both the subject matter and the poet.