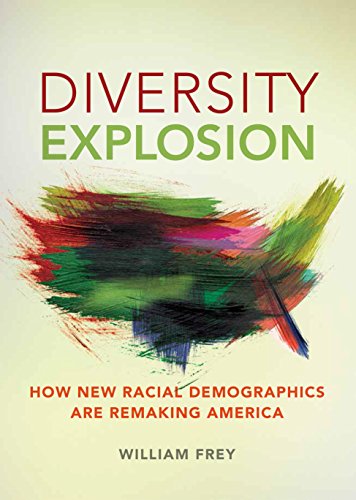 Diversity Explosion was written in 2014, and in just four years it is fascinating to see both how prescient the book is and how premature some of its optimism appears.  Much of the book is fairly straightforward demographic analysis. There is nothing particularly groundbreaking in noting that immigration and birth patterns show growth in minority populations and decline in white populations. Indeed, June 2018 headlines noted that a majority of states now have more white deaths than births. That this trend now reflects a majority of states was news, but only in the sense of “it’s here.” Anyone paying attention to demographics and statistics knew it was coming a long time ago.

What does stand out in the book is its optimistic tone. Frey believes that the growing diversity of America is a positive trend for the future of our country. He sees trends in many places showing less segregation, more intermarriage, better economic prospects for minority and immigrant populations, and extrapolates that this could mean less racial tension, more integration, and overall improvement in race relations in America.

William H. Frey is an expert in this field. A fellow of the Brookings Institution, Frey has long taught demographics at the University of Michigan. His Ph.D. is from Brown University. His academic and professional credentials do not keep him from writing with an engaging and approachable style that makes this book easy to read despite its obvious depth of research (and there are lots of colored charts and pictures, so it’s pretty, too.)

I want to believe him. I really, really do. I agree with much of what he says. Having lived in New York City, Denver, and Los Angeles, I am familiar with communities that are very diverse, even “majority-minority” populations. I love it. The best Thai food I’ve ever had was a few miles from the Buddhist temple in Sun Valley, CA (part of LA). I was asked to sing with a Filipino choir that practiced in Orange County, CA (thanks to my own interracial marriage to a New Yorker with Filipino parents). The first marriage I performed as a pastor was between a Nicaraguan immigrant (Hispanic) and an African-American. Our country is enriched by immigrants. My own DNA is (by family tradition, not by testing) a mixed bag of European countries, possibly with a seasoning of Native American.

I want to think that my multiracial children will live in a country where they are judged by the “content of the character” and not by their skin tones or their facial features. I want to believe that my grandchildren will be proud that their grandparents defied convention of their time and married “out.” I want to believe that my friends who are black and brown and white live in a country that honors their contributions, celebrates their heritage, and appreciates their status.

The current political situation, though, gives me great pause. I thought I would never be prouder of my country than I was in 2008 when we elected Barack Obama: a mixed-race man who was raised for awhile in Asia! I was wrong–I was prouder still when he was reelected in 2012. I allowed myself to believe that the immigrant-friendly, racially-open country Frey foresees in this book was actually the country I lived in.

After their loss in 2008, Republicans did an intensive self-reflective study that concluded their rhetoric and their policies turned off people of color, particularly immigrants. The study urged their politicians to chart a new course, evaluate areas of commonality between Republican positions and values espoused by different ethnicities, compromise or even change positions in areas that were not core Republican tenets to reach out and broaden their base. Their conclusion was that if Republicans failed to become a more inclusive party, they would be left behind by the demographic changes that were transforming America.

It remains to be seen whether the anti-immigrant, racially divisive governance of the current administration is a brief anomaly or marks the beginning of a much darker time in US politics. Diversity Explosion shows us what America is becoming. Closing the borders may delay the inevitable, but demography will win. Our country is changing, like it or not. Diversity Explosion takes a very hopeful point of view, that these changes will empower our country and her citizens, and that we will all be richer for participating in this transformation. I fully agree with this view. I only hope that those who disagree will read this book and reflect on its perspective.