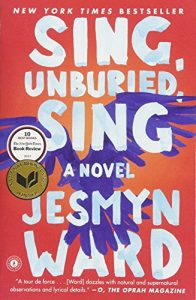 Sing, Unburied, Sing is a deep, complex, layered book that follows a family through Mississippi and through some terrible events. Jojo is just a boy. He lives with his grandparents, Pop and Mam, and his little sister, Kayla. His mother, Leonie, lives in the house but is not particularly maternal. Jojo actually calls her by her first name rather than “Mom” or anything like that. Jojo’s father, Michael, is in jail. Michael is white, Leonie is black, and the family is poor, living in a small Mississippi town near the coast.

As the story unfolds, we learn that Pop and Mam had a son, Given, who was murdered in a racially motivated killing several years before Jojo was born. We also learn that Pop had been sent to Mississippi’s notorious Parchman prison many decades earlier for the “crime” of being near his brother, who was wanted. Throughout the book we see the tragic and direct ways racism impacts this family. Pop was jailed primarily for being black. Given was killed for the same reason. Jojo is held at gunpoint and handcuffed by a white policeman, while an adult white woman is allowed to stand apart. Michael’s parents reject his family because of Leonie’s color, refusing any relationship with their grandchildren Jojo and Kayla. These realities of everyday life are just part of the fabric of the family’s life.

The bulk of the story is the trip to and from Parchman to pick up Michael. Michael has served his time and is eager to come back to his family. The trip is challenging. Jojo barely knows his father and Kayla does not know him at all. Mam has cancer and is dying, so Jojo does not want to leave her to come. Leonie insists that the children go with her. As the miles pass we learn more of her story, and in Jojo’s memories we learn more of Pop’s story. When they get to Parchman Prison they pick up two passengers. Michael is ready to go. Richie is also there. He is a ghost, a former inmate who Pop had tried to protect and take care of during his own prison stay. Richie sees Jojo and recognizes him as Pop’s grandson. Wanting to see his former guardian–and wanting to learn the story of how he died–Richie attaches himself to the family and travels home with them.

Jesmyn Ward won her second National Book Award with Sing, Unburied, Sing. Her first was for 2011’s Salvage the Bones. Sing, Unburied, Sing beautifully tells several stories. We read about Pop’s time in prison, a man who didn’t belong there in the first place. Given’s short life is remembered. Leonie’s love for Michael, a breathless need for each other that does not necessarily bring out the best in either partner. Her descent into addiction. Richie, a little boy about Jojo’s age who was sent to prison and who did not survive. And Jojo, old before his time, faced with a dying grandmother, an addicted mother, an absentee father, and left with being the primary caregiver for his toddler sister. All of these stories are told with warmth and sympathy, but also with unflinching honesty. After decisions are made, whether they are wise or foolish, the time for apologies is done. People do what they must do, and in the face of poverty, racism, drug addiction, sometimes what must be done is difficult and painful.

Jesmyn Ward pulls you in, weaves her threads around you, and leaves you with a deep tapestry. Sing, Unburied, Sing is beautiful and haunting, a book that is hopeful and painful. I was deeply moved by it. You will be, too.