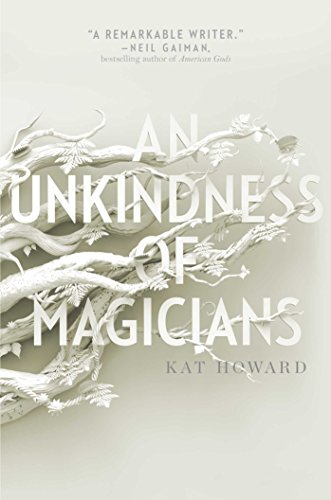 What if magic were broken? In Kat Howard’s novel An Unkindness of Magicians, magicians from the major houses in New York are competing, sometimes to the death, to become the leaders of the Unseen. Magic and magicians exist largely unseen and unnoticed by the majority of the population. Very few non-magic people are even aware of the magic that surrounds them. Most who are aware are from magical families, but they themselves were born with little or no magical prowess, able to perform only parlor-trick type skills like lighting a candle. Magicians, though, carry extraordinary power. Periodically the time comes to hold a contest among the leading magical families for ascendancy. When that time coincides with a period when magic randomly does not work, you have the potential for a crisis–and for a very interesting novel.

Howard’s magical world is populated by the magical equivalent of “old money.” The leading families are patriarchal, dominated by white men who are unused to sharing power. Crashing into this world is Laurent, a dark-skinned magician from a non-magical family who has come up through the ranks with talent, intelligence, boldness, and will. He is ready to start and lead his own house, declaring he belongs at the table of power along with the older and established families. To compete, though, he needs a champion, a magician of extraordinary power who can represent his house in the magical duels and, if necessary, die for him. Sydney applies for the job with an extraordinary display of magic in the heart of New York City. She has come to New York from…well, nobody knows. She is a mystery, a mystery with exceptional talent. Laurent hires Sydney, and together they upend the tournament and the establishment.

Magic has always been reliable. Predictable. Controllable. But soon after the tournament starts, things begin to change. Even powerful magicians sometimes struggle with basic skills–candles won’t light. Other spells go completely out of control. An early tournament contest ends in a dueler’s death when the spell he cast surges in power and consumes him. For some of the established families, this is an opportunity to lay the blame at Sydney’s feet. She’s a newcomer. She broke the magic. Sydney knows it was not her. She suspects a much deeper and darker force at play, one that has been building in power for decades.

An Unkindness of Magicians is full of magic, but like many fantasy books warn, this magic has a price. How much would one pay to do magic? As the book progresses we see what the cost of magic is, and we see who is willing to pay that price. We also see who is willing to force others to pay the price for them. Sydney’s background is revealed, and we see what magic costs in her life and in the lives of others. We also see what the lust for magic does for those who are less willing to absorb that cost themselves.

Sydney is a strong protagonist, a magician with extraordinary talent and strength of character. She is also not alone in her quest to confront the challenges facing magic. She collects allies along the way, men and women who have also become concerned about the toll magic requires. I love the way Howard’s characters relate. In her fiction, just like life, strong women and strong men make each other stronger. By the end of the book, Sydney has gone from being a loner to being part of a team. I don’t know whether a sequel is planned for Sydney, but whether her future is written or just imagined, we can anticipate it being supported by her friends.