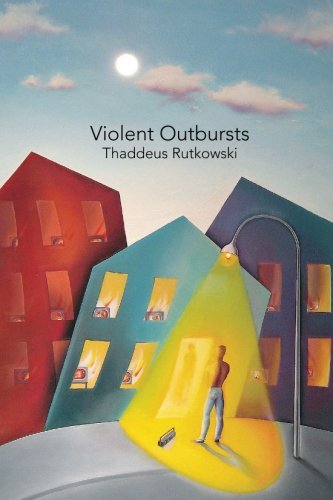 I love reading authors who live and write in the margins. Don’t get me wrong. I’m down for a Patterson or Baldacci or Grisham any day of the week. But the authors and books that excite me are those that open a new door, that reveal a new truth, that show me worlds I would not have seen on my own.

Thaddeus Rutkowski is one of those authors. He grew up in the margins. A mixed-race kid in Central Pennsylvania, he grew up before Asian faces were common here. Despite its proximity to State College and Penn State University, Rutkowski’s hometown of Hublersburg (near Bellefonte) is to this day a town with mostly white residents. I do not intend to presume. I love Bellefonte, and my own (Asian-American) wife has always been very warmly received by everyone there that we’ve met. But I can imagine that as a child who looked different, there might have been a sense of “otherness” growing up.

His 2015 book Violent Outbursts is a collection of short writings. Violent Outbursts is hard to characterize, mostly because it is a book written in the margins of categories. Rutkowski has a flair for language. He plays with words, morphing them and putting them together in new ways. One example is an entire essay in homage to McDonalds, stringing words together that start with the letter “M.” He may be the first to describe a fast food cook as a McMaestro. Although the writings are probably considered “prose,” the craft certainly is on the margins between poetry and prose. It is also in the margins of fiction and non-fiction. Some of the poetic essays seem to be autobiographical: one tells of he and his siblings running up and down staircases in a new family home. Another tells of his first experience smoking. Perhaps the most painful was one talking about cousins who boast of being 100%, compared to his 50% and his daughter’s 25%. As part of a biracial family, that one hit very close to home.

Others are clearly fictional. At least, I am assuming he was never personally a dung beetle, despite the first person narrative of the essay. But the beauty of poetry, even poetic essays, is that truth is greater than the facts. People living in the margins often have to make the best of what they have, and they often create beauty from those discarded remnants. A dung beetle may have every right to celebrate what he is able to do, to revel in that which others find disgusting, and to make it his own.

Rutkowski’s Violent Outbursts is at once defiant and celebratory, poignant and triumphant. The writings express a desire to belong–learning to smoke “the right way,” wanting to fit in, wishing for the right clothes and haircut and car. They recognize that otherness will never change, that the writer will never be 100%, the dung beetle will never be accepted by the other animals. They sometimes revel in their otherness, wanting to be the hick with the shotgun going after the rat in the apartment, enjoying and hating being the rural kid with the outhouse while being surrounded by rich city kids. And they acknowledge that fitting in will always come unnaturally, requiring a surrender of some desires and the recognition that there will always be a separateness.

Violent Outbursts is short, and none of the essays are more than two pages long. It can easily be read in one sitting, but it is worth taking longer and reading one or two, then coming back to it later. When you’re probing the margins of society, sometimes it’s best to push at them a little, then come back at them again later. Rutkowski’s Violent Outbursts does this very well, and that might be a good way for the reader to do it, too.