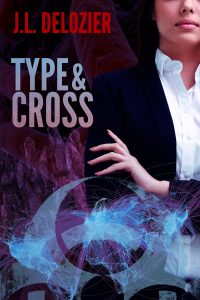 Persephone “Seph” Smith is a profiler. Her acute empathy allows her to get into the minds of criminals, understanding the way they see the world and sometimes anticipating their next moves. When a killer executes a plot to release a deadly virus into the world, one with the potential to kill well over half the population, Seph is called to join the team pursuing him. What follows is a globe-trotting chase matching Seph’s wits against those of a killer who seems just as capable of seeing through her as she is of seeing through him.

J.L. Delozier is a doctor with years experience in both community medicine and in treating people during the worst of emergencies. Her clinical expertise shows in the details of the book, but does not overwhelm the story. This may say something about me, given that the book is about a mass murderer using biological weapons to cull the population, but I found the book to be a very enjoyable read. Seph is a thoughtful protagonist, capable of using her intelligence to track and capture the criminal, but also one who considers seriously the ramifications of life and death when confronted with the reality of plague in a modern era.

Type and Cross raises some interesting questions. What would people do when they knew they had a month to live? Delozier poses some intriguing possibilities. Some would turn to religion. Some would see an opportunity to strip off the veneer of civilization and give in to much baser instincts: rape and pedophilia, for example. Some would withdraw their savings and take that “bucket list” trip. Others would huddle close to loved ones. These possibilities are not dwelt upon. They are listed as observations Seph makes as the world confronts mass mortality, but they show the depth of the author and the character. We are mortal creatures who never fully accept our mortality. Each of us tends to live as though we have all the time in the world. Curiously, though, that refusal to bow to the inevitable might make us powerful enough to live beyond our years.

Seph realizes she will die. (Spoiler, though, she doesn’t.) The disease will kill almost everyone. This gives her an element of freedom to pursue a hurried relationship that, if they had more than a month to live, might not have developed. It pushes her to appreciate and welcome her family roles as a sister and an aunt. But it also focuses and motivates her to complete her task and find the killer. If she dies, when she dies, she will die doing what she is supposed to do. Ultimately, that may be all any of us can live for.

I am looking forward to finishing the prequel book, Storm Shelter. Although Type and Cross was published first, it should be regarded as the second book in the series according to the author. Regardless of the order you read them, J.L. Delozier has given us a delightful protagonist who may have to save the world again someday. I am glad she is up to the task.