The first Foreigner book was published in 1994. C. J. Cherryh won her first (!) Hugo Award in 1979. Sustained excellence is hard. Bands come and go. Companies wax and wane. Even countries rise and fall. In any walk of life, maintaining a high standard is a constant struggle. After twenty-four years, nineteen novels and two short stories, she could perhaps be forgiven if she went through the motions on her latest offering. Instead, she continues writing must-read books in a must-read series. In a genre that has tended to overlook talented women, Cherryh’s body of work demands respect.

Bren Cameron is the main protagonist through the series. Cameron is the “paidhi,” an intermediary between the native (non-human) “Atevi” population and the human colony on the planet. The role developed almost 200 years earlier, created to maintain peace between the species after a war almost wiped out the humans soon after they landed. Traditionally, the paidhi translated documents, negotiated trade deals, and basically tried to stay out of sight. Largely ignored by the atevi and forgotten by the humans, for two centuries the paidhi was kept in the dark and left to his own devices, unable and unwilling to serve the needs of either species.

A young Bren Cameron accepted the position straight out of college, about the same time as a new ruler became “aiji” of the Atevi. “Tabini” became supreme leader of the Atevi with a vision to unify the Atevi and to reconsider the relationship between humans and Atevi. In these goals he found a willing ally in Cameron. The need for change accelerated when a new spaceship appeared in the sky. The space station humans had built and abandoned two centuries before still orbited the planet, but when a new ship with humans arrived, the Atevi realized they needed to catch up technologically to their visitors and the guests they shared their planet with.

Through the Foreigner series, Cameron strives to be the impartial mediator that the “paidhi” role requires. He redefines it multiple times, developing it under Tabini’s direction into essentially a cabinet role within the Atevi government. He becomes a negotiator, not only between the island community of humans and the mainland population of Atevi, but between the spaceship humans and the planetary populations, between different Atevi factions and Tabini’s government, and ultimately between a new species, the Koh, and the two populations he serves. Cherryh does a remarkable job shepherding Cameron’s growth as a character through the series, changing his perception of himself from that of a human serving a human function to a human serving an Atevi function to a person–still human–but representing people of whatever species they may be.

The other main character of the books is Tabini’s young son, Cajeiri. Cajeiri is born early in the series, but as he becomes a boy his role in the books becomes more prominent. The most recent books in the series split their attention and their perspective between Cameron’s activities and Cajeiri’s. Cajeiri starts as a brash, immature child who tries to escape his caregivers and find adventure. Not appreciating that as the son of the ruler, adventure could quickly become danger, Cajeiri is wont to make poor choices and rash decisions–just like many 7-year-old humans do. As he ages through several of the books, though, Cajeiri matures. He learns from his mistakes, he embraces his role as future ruler of his people, and he begins to attract followers who are loyal to him personally. A bright and precocious child, he brings a point of view to the books that is both childlike (and sometimes childish) and distinctly non-human. He deeply admires both his father and Bren Cameron, and they in turn grow to trust him. Through his adventures in space with Cameron, he develops his own human friendships that violate tradition and precedent. Cajeiri will clearly become a leader who takes his father’s vision of interspecies cooperation to new heights.

Cherryh is remarkable at switching perspectives from human to Atevi, from adult to child, and from planet to space. Atevi dialog is distinct from human. Relationships are different. “Love” and “friendship” mean very different things to humans and Atevi, and those relationships and the words we use around them figure prominently through the series. Loyalty and service, politics and tradition, all the sundry inner workings of family and clan and city and community are outwardly similar in many regards between the species, but the devil is in the details and without understanding the differences misunderstandings are easy–and potentially deadly. Cherryh weaves a tapestry that is both familiar in its threads and yet deceptively intricate in its stitches.

The Foreigner series is actually several series, each a trilogy. The most recent book (2018) is Emergence. Although you can enter the series at almost any point and quickly capture the direction, it is well worth the investment of time to go back to the original book (Foreigner, 1994) and start from the beginning. 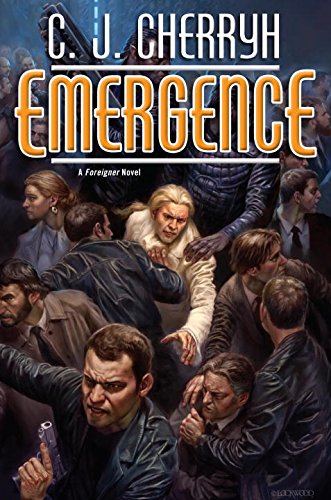