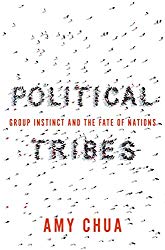 Tribalism is a form of macro-group identification that runs much deeper in the human psyche than we may realize. Humans are hard-wired to belong. Group identification starts in infancy with family bonding, but quickly we start learning who is “us” and who is “them.” Even babies react differently to photos of strangers depending on the ethnicity of the subjects; photos of people that “look” like the ethnic group the baby is from are generally received more positively by the baby. As we grow, other tribal identifiers become important: language, dress, religion, accent. Although we Americans live in a multiethnic society, these innate needs to belong to a group are no less important to us. Ignoring their existence can lead us to misinterpret the world we live in, and can create tensions and conflicts that could be avoided with a little more awareness.

Americans tend to ignore the power of tribalism. We do this at our peril, and to our disadvantage in both national and international politics. Amy Chua diagnoses this often willful ignorance in her book Political Tribes, and shows numerous specific examples of how the failure to account for tribal behavior has hurt us.

We seldom think about tribalism within America, and indeed, Chua describes America as being unique in creating a tribe of its own, one that supersedes typical tribal delineators of ethnicity, religion, economics, language, etc. Within this super tribe, though, are also harbingers of new tribes forming. The 2016 election was possibly a foretaste of tribal fracturing; coastal elites were surprised by the collective electoral power wielded by less affluent whites from the midwest and south. The growing multiethnicity of America may also harden those tribal differences, as the increasing population of Asian and Hispanic residents diminishes the relative power of poor and middle class whites.

Many of Chua’s examples come from recent foreign policy mistakes. America learned some of the wrong lessons from her successes rebuilding Germany and Japan after World War II. Both of those countries were largely homogeneous, essentially comprised of one tribe of people. Japan had long been that way. Though there are minorities in Japan, they are very small in number compared to the predominate Japanese people and do not factor largely in political or economic decision making. Germany’s single tribe was created through violence and ethnic cleansing: the Holocaust and purging of ethnic minorities under the Nazi regime. The end result for both countries was an internal unity that, even in defeat, created an environment amenable to democratic reforms. Thus the rapid democratization and economic growth seen after World War II was in no small measure a result of the already unified and largely homogenous populations of those countries.

Vietnam may have been America’s first and greatest military defeat, but before the military defeat was a failure to understand the tribal dynamics of the country. Vietnam was far from the unified population found in Japan or Germany. Not only were there numerous people groups native to the peninsula, but there were centuries of interaction with China along with a significant minority of ethnic Chinese within the country. This minority held disproportionate power, especially economically. This power imbalance led to resentment and mistrust, and when first the French and later the US took the side of the hated elites, popular resistance and opposition was assured. Chua’s analysis is that the Cold War backdrop that featured so prominently in American planning and understanding of the war and the entire context in Vietnam masked the real situation: the Vietnamese people were tribally motivated to assert their independence from their Chinese minority, and far from being interested in the Communist/Capitalist battle for the world they were completely focused on asserting their own will within their own borders.

More recently, both Iraq and Afghanistan have occupied American attention and have been occupied by American troops for almost two decades. Both have eluded resolution through military and political measures, through Republican and Democratic administrations. And both countries are highly tribal. Shia and Sunni and Kurd tribes in Iraq have been rivals for centuries, separated by both religious differences and competing economic interests. Multiple tribes inhabit the land of Afghanistan, but the ethnic Pashtuns have dominated both government and economic spheres for generations. This has led to resentment and conflict between the differing tribes, often resulting in bloodshed. Into this morass of tribal rivalries and ethnic hostility within the countries America sent troops, usually without knowledge of the history or traditions that ran deeper than any political structures. Without that key local knowledge, that understanding of tribal passions and historical animus, Americans often deepened rifts and created or exacerbated hostilities that perhaps could have been avoided with a deeper understanding of the tribal divisions that predated their arrival.

Chua warns that no tribe easily or willingly lets go of power, influence, or wealth. If we continue to ignore the power of tribalism, we may find ourselves consumed by its power within our own borders.

For a different perspective on internal cultural differences within the United States, Colin Woodard’s book American Nations: A History of the Eleven Rival Regional Cultures in North America is IMO (in my opinion) a more hopeful look at both what separates us as a country and what binds us together. Woodard identifies ethnic and cultural heritages that continue to echo and shape us, both making us one nation and making us distinct peoples within that nation. Woodard observes that many of these regional differences carry influence even upon newcomers and immigrants: in many ways Vietnamese immigrants to Houston will, within a generation, be more similar to other Texans than they will be to people who may share their lineage but settled in California instead. Although there are concerns about what divides these nations, there is also great encouragement that the power of American ideals and ideas continues to unite people who choose to settle here.