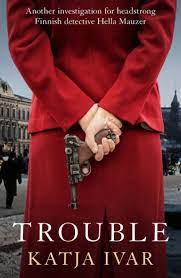 Am I in trouble if Trouble is the first book I have read in this series? I ought to be. If this novel is any indication, Hella Mauzer and her investigative skills need to find out where I’ve been. Clearly it was not keeping up with this mixed genre set of detective novels featuring a nascent feminist in post World War II Finland.

The book opens in 1942 with a terrible accident. A family is struck and killed by a hit-and-run driver in a truck. Only the younger daughter, Hella, survives. She is at home with a minor illness when her family gets wiped out in an instant.

Some years later, Hella is a former police officer living in Helsinki. Her former boss at the police department asks her to conduct a routine background check on a member of the Finnish clandestine services. This man has applied to become the head of the Helsinki homicide department. Before offering him the job the police want to make sure there are no surprises–and the clandestine services are not very forthcoming with information.

Hella takes the job, hoping it will be an easy paycheck. She is still recovering from injuries received during her previous case, and has moved back into her family’s old house. And initially it does seem very straightforward. The man’s neighbors like him. His in-laws like him. Everyone seems to like him. He is a widower, injured when trying to rescue his wife from a fire in their home. Strong, sympathetic, a patriot, a public servant. Indeed, an excellent candidate.

There is just the little matter of the anonymous letters being sent to the police. And the cousin who despises him. And that uncomfortable feeling that Hella gets when people are not being honest with her. None of this is enough to derail the appointment. It is enough to keep Hella looking.

Hella is also looking into the deaths of her family. It is possible they died in a tragic accident. The truck, though, was stolen. The driver wore gloves to avoid leaving fingerprints. There were enough differences from a typical accident to make Hella question the official report. One thing no detective likes to see are discrepancies, particularly when the victims are your family.

Trouble is a captivating novel. The roles of men and women in post-war Helsinki were very different than we currently find acceptable, and I cringed on Hella’s behalf every time a man suggested to her that she should just get married, or have children, or quit working. Katja Ivar captures the flavor of the paternalism that was the norm in my grandparent’s generation, and she does it well. I am sure she does not take it as far as she could, but it is done with grace and humor and sensitivity.

I would not blame Hella, though, if she ends up punching someone in a later book.

Our thanks to Anne Cater of Random Things for getting us in Trouble…rather, giving us the book Trouble so we could participate in this troubled book tour. The opinions here are solely those of Scintilla (and it was no trouble at all). For more trouble about Trouble, check out the other bloggers on this tour.