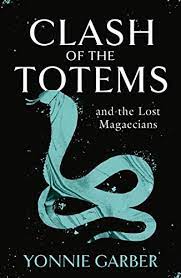 Twelve-year-old Ellery Brown lives with her mother in a quiet, boring village. She is a bookworm, not surprising since her mother is the school librarian and the small academy in the village where Ellery attends school. She has a couple of close friends, Letty and Thomas, loves her dog, and knows nothing of her father.

Sometimes, though, what you don’t know can hurt you. Ellery and Thomas get trapped in a fire at their school and are rescued by a stranger named Hendrick Myersccough. Myerscough is a teacher at a school for Magaecians, the same school where her father was a student long ago, and he is willing to bring Ellery and her friends to study there.

Unlike certain other schools in certain other fantasy novels, this school is not limited to those with magical abilities. Certainly most of the students have access to powers through their totem animals, but even “dwellers,” (non-magic people) can learn to access totems and use their gifts. The line between magaecians and dwellers is a fine one and can be blurry.

Ellery’s father was a magaecian, as was her maternal uncle. Her mother is a dweller. Ellery discovers that her mysterious missing father has passed down an extraordinary power, one that has the potential for great benefit or great destruction. Discovering how to control this power, confronting her inner fears and anger, and depending on friends who could be accidentally killed if she loses control, gives Ellery a lot to deal with. Not to mention trying to deal with the intimidating Mr. Myerscough, who has taken a particular interest in Ellery.

Yonnie Garber has developed a cozy fantasy for young readers. My guess is that this would appeal to tweens and younger teens (although this grandfather enjoyed reading it as well). Ellery is a winsome protagonist, full of spunk and fire, quick to anger and remorse, definitely written by someone who knows her young teenagers. She is brave and foolish, a loving friend and a sarcastic foe, afraid of her own power and hopeful that she can make a difference.

Garber’s magaecians are in touch with the earth power and are fully committed to making the world a better place. Some of them believe the only way to do that is to remove dwellers from the earth. After all, their wanton destruction of the environment has led to global warming, pollution, deforestation, mass extinction, and the other ills of the modern world. Others believe their mission is to teach the dwellers a better way of living on earth. What they all believe is that the earth is not in danger of being destroyed by humans. Rather, humans have awakened the earth with their negative energy, and thus are in danger of being to destroyed by their own planet.

Our thanks to both Yonnie Garber (especially for the signed copies and kind note) and to Kelly Lacey of Love Books for inviting us to participate in this blog tour. The opinions here are solely those of Scintilla. For other perspectives on this novel, check out the other bloggers on this tour.