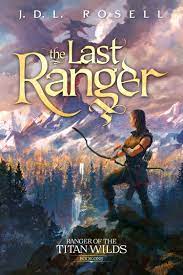 Leiyn is a ranger. Charged with guarding the Titan Wilds against encroachment from fierce beasts and even fiercer tribes coming down from the mountains, she has lived with the rangers from childhood. Trained to be an expert shot with the bow and a fierce hand-to-hand fighter, she has one more shameful asset at her disposal. She carries a power within her that helps her heal from even mortal wounds, albeit at a cost. Her restoration comes at the sacrifice of another life. In times of battle, she can snag the life force from an enemy or an animal just before killing them. In a pinch, she can pull the life force from a tree, grasses, even insects and small animals.

Her father taught her at a young age that this was a curse, the curse that killed Leiyn’s mother. Cast by the Gast shaman who delivered her, the magic within her came with a death. Her father never forgave the Gasts, never forgave the shaman, and never accepted the magic as any sort of blessing. It was a curse, and for Leiyn to use it was to be cursed. Leiyn accepted this as fact and fought against using it.

When a Gast party arrives in the Titan Wilds, Ranger Leiyn meets them with hatred and suspicion. Although they bear a letter of passage from a military commander, she cannot see past her prejudice to assume their mission is as peaceful as they claim. When she and another ranger return to their lodge to find it burning, their companions dead, and their killers dressed as Gast, Leiyn’s worst fears are confirmed.

J.D.L. Rosell’s novel caught me early and never let me go. Leiyn is a wonderful character. Brash, impetuous, angry, prejudiced, ferocious, and even more feral than her horse (which is named Feral), she is a weapon of vengeance waiting to be aimed at those who destroyed her home and her fellow rangers.

The question is whether her aim is truly at the ones responsible.

Our thanks to Kelly Lacey of Love Books for our copy of The Last Ranger, provided so we could take part in this blog tour. The opinions here are solely those of Scintilla. For other perspectives, check out the other bloggers on this tour.