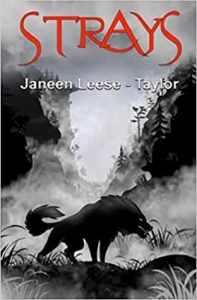 Officer Theodore Night is seldom called to the scene of a crime. Once a detective, he has stepped back from the field of his own volition to train dogs for the police. Although still an officer, still with the rank of detective, Night much prefers the company of four-legged partners to association with their bipedal handlers. Occasionally, though, his expertise with dogs comes in handy. Nothing can truly prepare him, though, when he is called to the brutal murder of an entire family. The only clue of any sort: huge paw prints, far larger than those of any dog, possibly larger than any wolf, trailing through the blood on the scene. Night works with Alsatians, which are very large dogs. These prints dwarfed those of his charges.

Ireland has no wolves, and Night is not really part of the case. Night’s hobby is singing with a local rock band. Although his mind was focused on the scene he observed, that evening his band had a gig. A local barista, a man named Blair, was in the crowd. He and Night were acquainted, though their interactions had been testy at best.

As Blair was leaving, though, he doubled over in pain. When Night went out for a smoke, he found Blair writhing and groaning on the ground. Assuming it was from a drug overdose, Night offers to call an ambulance. Blair refuses and insists that he just be taken to a place where he can get out of the light. The moonlight. Night takes him to his own home, where his seven (!) dogs–six Alsatians and their mixed-Corgi overlord–react very strongly and negatively to Blair. The reason quickly reveals itself, as Blair transforms into the largest wolf-like creature that Night has ever seen. Fighting for his life, manages to subdue the creature and handcuff it.

The next morning, having returned to human appearance, Blair explains that he is a lycanthrope. A werewolf. Night assumes he must be the killer until he gets another call about another crime scene. The time of the killings happened while Blair was handcuffed at Night’s house.

So begins as unlikely a partnership as one might imagine. A very earthy detective, not one to believe in the supernatural or in fairy-tales, gains a werewolf partner who brings special knowledge of this secretive group hiding among the normal citizens of Ireland–and a secret knowledge of how to make amazing coffee. This is much more from his barista training than his werewolf ancestry, but definitely enhances the collaboration. As more families are targeted, more bodies are ripped apart, and more gigantic paw prints and claw scratches are found, the pressure grows on Blair and on Night to get results.

Then, when Night himself becomes a target, the pressure becomes extremely personal.

Janeen Leese-Taylor brings some unusual twists to the typical werewolf tropes. In her world, some werewolves can control their transformations and maintain their human nature even in their animal state. Others cannot. Transformation is not limited to the full moon, and some of them can even transform during daylight, although for reasons of security they don’t transform in front of humans. Werewolves also have their own church devoted to the moon goddess–and like our own churches, not everyone attends or believes.

Like werewolves, this book is a hybrid between urban fantasy and detective novel. Both the mystery and the fantasy world-building engaged me. It is a creative and very well done novel. Perhaps not one that will set the award presenters on fire, but one that is quirky and fun and intense and exciting. I would definitely read more books by this author.

Our thanks to Zoe from Zooloos for our copy of Strays, given so we could review it for this blog tour. The opinions here are those of Scintilla. For other perspectives on this novel, check out the other bloggers on this tour.